498 Productions, based in New Orleans, wishes everyone a Happy Mardi Gras. Our current sales celebrating the Beatles first U.S. visit will expire at midnight on February 21, 2012, at the same time that the New Orleans Police Department rides horses through the French Quarter telling revelers that Mardi Gras has ended and it is time to go home. Today’s trivia questions deal with the Beatles Mardi Gras connection.

What album did Paul McCartney record in New Orleans during the Mardi Gras season?

What was the name of the album, what year was it recorded and released, and in what New Orleans studio was it primarily recorded?

What song did Paul specifically record in celebration of Mardi Gras and on what single was it released as a B-side?

Bonus: What New Orleans musicians played on the song?

Paul McCartney recorded the album “Venus And Mars” in New Orleans at Sea-Saint Studios during the 1975 Mardi Gras season for release later that year. On the day after Mardi Gras, Paul and Wings recorded the song “My Carnival,” which was not on the album, but was released as the B-side to the single “Spies Like Us” a decade later in 1985. It also appears as a bonus track on the 1988 CD release of the “Venus And Mars” album. New Orleans native George Porter of the Meters played bass on the song. Also participating were other members of the Meters and singer Benny Spellman, who recorded the songs “Fortune Teller” (covered by the Rolling Stones) and “Lipstick Traces.” Spellman also sang the bass part on the classic sixties hit single “Mother-In-Law” by Ernie K-Doe. 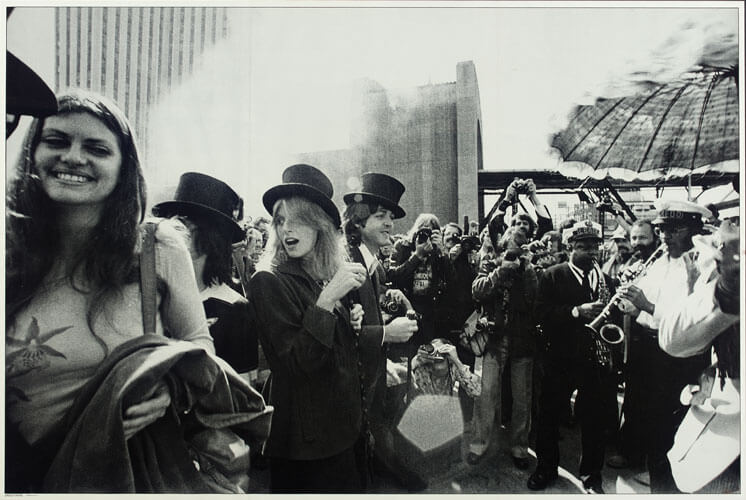 Paul and Linda (in top-hats center) dance to the sounds of the Tuxedo Brass Band as they get ready to board a New Orleans riverboat for a post-Mardi Gras party on February 13, 1975.