50 Years Ago: The Beatles Record their Second Single 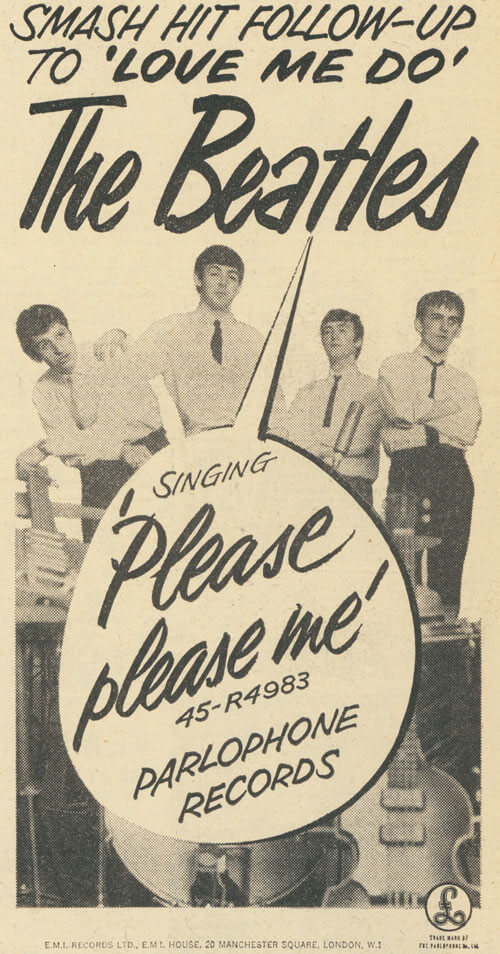 The relative success of the Beatles first disc, Love Me Do, earned the group a session to record a second single, which took place at Abbey Road on November 26, 1962. The result was a powerful platter containing Please Please Me and Ask Me Why.

The Beatles had previously rehearsed and auditioned Please Please Me for George Martin at Abbey Road on the afternoon of September 4, 1962, prior to the group’s first proper recording session. The song sounded drastically different from what would become their first big hit. According to Martin, Please Please Me was “a dreary song” which “was like a Roy Orbison number, very slow, bluesy vocals.” He suggested that the group rearrange the song by speeding up the tempo and working out tight vocal harmonies.

The group returned to Abbey Road on September 11. After recording P.S. I Love You and a remake of Love Me Do with Andy White on drums, there was time available to begin work on a third song. Following Martin’s advice from the week before, the band, with Andy White still on drums, performed Please Please Me at a quicker pace, but failed to nail it down. This early version of the song, which made its debut on Anthology 1, is interesting, but suffers in comparison to the remake the group would later record. Conspicuously absent from this version is John’s harmonica. In addition, John and Paul’s harmonies are not as effective.

Paul described the initial recording of the song in the February 23, 1963, Melody Maker. “After we had recorded Love Me Do and P.S. I Love You, we played Please Please Me over to recording manager George Martin. It was a bit fussy and he told us to smooth it out a bit. Simplify it. We did — and the results speak for itself.”

John told a similar story in the March 8, 1963, NME. “Our recording manager, George Martin, thought our arrangement was fussy, so we tried to make it simpler. We were getting very tired, though, and we just couldn’t seem to get it right. We’re conscientious about our work and we don’t like to rush things. In the following weeks we went over it again and again. We changed the tempo a little. We altered the words slightly. And we went over the idea of featuring the harmonica, just as we’d done on Love Me Do. By the time the session came around we were so happy with the result, we couldn’t get it recorded fast enough.”

The Beatles got their chance to record the song on November 26, 1962. Unlike the prior September sessions for their first single, the group was recorded on twin-track tape instead of mono (one track tape). Rather than first obtaining an acceptable instrumental backing for overdubbing of vocals, the group did the songs live, simultaneously playing their instruments and singing as the tape rolled. All of the instruments were recorded on one track and the vocals on the other. This enabled George Martin and the engineers to achieve a proper balance of the vocals and instrumental backing. This technique would be used up until the recording of the group’s fifth single, I Want To Hold Your Hand, in October, 1963.

After an hour-long rehearsal, the Beatles began work on a remake of Please Please Me. This time the group perfected the song. It was completed in 18 takes, including harmonica overdubs by John. Four days later, George Martin edited the finished master from an unknown number of takes, correcting a vocal flub in the third verse. The song was then mixed for mono.

Please Please Me is an exciting rocker propelled by superb drumming from Ringo. John and Paul share lead vocals backed by George on the chorus and bridge. Unlike the first single, this time both John and George play electric guitars, with John on his Rickenbacker Capri and George on his Gretsch Duo-Jet. Paul plays his Hofner bass. After this recording, Martin knew there would be no need for a session drummer for the band. Speaking from the control room of Studio Two, Martin confidently told the group, “Boys, I’ve just heard your first number one record. Come up and have a listen.”

After hearing the playback and breaking for tea, the band returned to Studio Two to record Ask Me Why. The Beatles had recorded the song at their first visit to Abbey Road on June 6, 1962, although tape of that performance no longer exists. Ask Me Why was part of the group’s stage show at that time, evidenced by their recording of the song before a live audience at the Playhouse Theatre in Manchester on June 11, 1962. This performance was broadcast four days later on the BBC program Here We Go and appears on the bootleg collection The Complete BBC Sessions. The arrangement is very similar to that of the later recorded single, but features Pete Best on drums since it was performed prior to his being replaced by Ringo. The group also ran through the song during their September 4, 1962, pre-recording rehearsal at Abbey Road.

The group’s familiarity with Ask Me Why facilitated its quick recording, with the sixth and final take being the master. John sings the lead vocal, backed by Paul and George. The song features John on Rickenbacker Capri, George on Gretsch Duo-Jet, Paul on Hofner bass and Ringo on drums, providing a Latin beat. The song was mixed for mono on November 30.

Six weeks later, the Beatles second single was in the stores. It hit the charts the following week, and in a little over a month, Please Please Me became the Beatles first number one single. But that’s a story for another time.

Today’s trivia questions pertain to the Beatles second single, Please Please Me, and the Abbey Road session during which it was recorded.

1. What song, recorded by a famous American crooner, was the inspiration behind Please Please Me?

2. Who was the American crooner who recorded the song that inspired John to write Please Please Me?

3. In addition to Please Please Me and Ask Me Why, what other Lennon-McCartney song was recorded at the Beatles November 26, 1962 session for their second single?

4. What artist recorded and released the song referred to in question 3, above?

John was inspired to write Please Please Me by his memories of his mother Julia singing a song titled Please. American crooner Bing Crosby’s recording of Please topped the U.S. charts for six weeks in 1932.

John was impressed with the word-play in the song’s lyrics, particularly the line, “Please lend your ears to my pleas.” He took it one step further with the line “please please me,” which first uses the word “please” as a request and then as a verb meaning “to pleasure.” John envisioned the song as a slow ballad in the style of Roy Orbison.

Having studio time remaining after recording the two songs required for the next single, Please Please Me and Ask Me Why, the group went to work on a tune written by Paul, Tip Of My Tongue. Although George Martin told Mersey Beat it was a great number, he added, “we’ll have to spend a bit of time giving it a new arrangement. I’m not too happy with it the way it is.” Realizing that the song did not measure up to their standards, it was later given to Tommy Quickly, who was also managed by Brian Epstein. When released as a single in the summer of 1963, Quickly’s version of the song received little attention and was quickly forgotten. 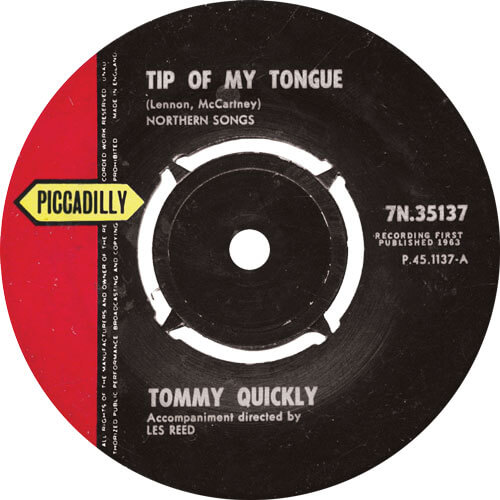