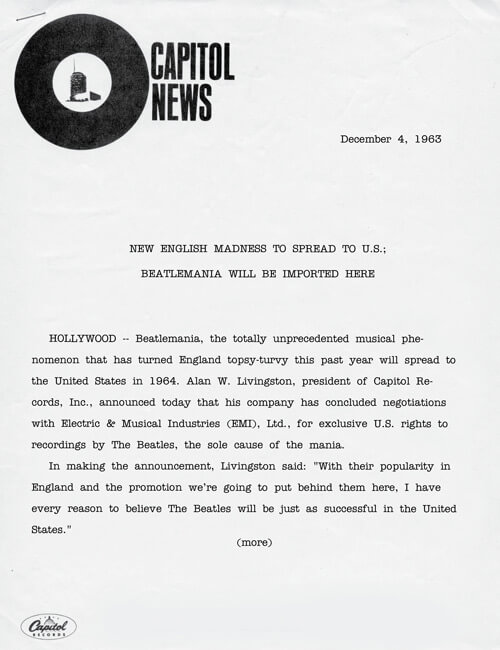 On December 4, 1963, Capitol Records issued a press release (computer re-creation shown above) stating that the company had obtained the exclusive U.S. rights to recordings by the Beatles. Company president Alan Livingston boldly predicted that the group’s popularity in England combined with Capitol’s promotion would make the Beatles just as successful in the United States. While this may have sounded like typical record company hype at the time, Livingston’s prediction of the group’s upcoming success in America would prove true, well beyond his and Capitol’s wildest expectations, hopes and dreams.

Although Capitol initially turned down the Beatles four times, the company would go on to spend approximately $40,000 promoting the group’s initial Capitol releases. In addition to creative and exhaustive promotion, Capitol had the manufacturing and distribution capacity to quickly get records in the stores. They would do an incredible job marketing the incredible music of the Beatles.

As for the Beatles themselves, the week of December 2, 1963, was another productive week combining television, radio and concert appearances. On Monday, the group taped an appearance for The Morecambe And Wise Show, a comedy program on the ATV network. The Beatles performed This Boy, All My Loving and I Want To Hold Your Hand, plus a comedy sketch with the program’s hosts, Eric Morecambe and Ernie Wise. The program was not broadcast until April 18, 1964. That evening, the Beatles played at the Ballroom of the Grosvenor House Hotel in London before an elite crowd of well-dressed British adults as part of a charitable fundraiser for spastics. This was not part of the group’s U.K. tour.

The following night they played another tour date, this time at Guildhall in Portsmouth. They were then given some rare time off with nothing scheduled on Wednesday through Friday.

After three full days off, the Beatles were back in action on Saturday, December 7, this time in Liverpool. The Beatles were scheduled to play an afternoon concert at the Empire Theatre in front of 2,500 members of the Beatles fan club. Prior to the concert, the BBC taped an episode of its television program Juke Box Jury, with the Beatles being the entire panel. Of the 13 records reviewed, the Beatles voted all but four to be hits. The program was broadcast at 6:05 pm that evening. For the concert, the group opened and closed the show with shortened versions of From Me To You, using the song as bookends surrounding an impressive set that included I Saw Her Standing There, All My Loving, Roll Over Beethoven, Boys, Till There Was You, She Loves You, This Boy, I Want To Hold Your Hand, Money and Twist And Shout. The BBC taped the concert for television broadcast later that evening at 8:10 pm on a program titled It’s The Beatles. Unfortunately, technical difficulties marred both of these programs. The Beatles also recorded a two-minute interview for the Christmas edition of the BBC radio program Top Of The Pops. The day’s activities continued shortly thereafter, with the group being escorted by police to the Odeon Cinema on London Road, where the Beatles tour resumed with two shows at the movie house.

By comparison, Sunday, December 8, was a days of rest, with a tour concert at the Odeon Cinema in Lewisham, London.

1. Before finally obtaining the rights to issue Beatles recordings in the U.S., what four Beatles singles did Capitol Records initially turn down?

2. What non-Beatles song did the group perform vocally on the Morecambe And Wise Show?

3. Prior to the April 18, 1964 broadcast of the Beatles on The Morecambe And Wise Show, what television program contained performances by the Beatles and the comedy team of Eric Morecambe and Ernie Wise?

1. Capitol Records initially turned down Love Me Do, Please Please Me, She Loves You and I Want To Hold Your Hand. After Capitol turned down the Beatles first two singles, Vee-Jay Records entered into a licensing agreement with EMI’s Transglobal subsidiary. Vee-Jay released Please Please Me and From Me To You as singles during the first half of 1963. Although it is often reported that Capitol turned down From Me To You, this is not the case as Vee-Jay had a right of first refusal to issue the song under its licensing agreement. After EMI and Transglobal unilaterally terminated the licensing agreement with Vee-Jay for non-payment of royalties, Capitol was offered She Loves You, which it also rejected as not being suitable for the American market. The song ended up on Swan Records, a small label out of Philadelphia. Capitol also initially turned down I Want To Hold Your Hand, before finally agreeing to enter into a licensing agreement for the exclusive U.S. rights for the Beatles.

2. The Beatles performed a short vocal version of Moonlight Bay on The Morecambe And Wise Show.

3.  The Beatles taped performances of Twist And Shout, Please Please Me and I Want To Hold Your Hand  were broadcast on the February 23, 1964 Ed Sullivan Show. The group had taped the songs immediately after the afternoon dress rehearsal for the February 9, 1964 Ed Sullivan Show. The three songs, along with Sullivan’s introductions and post-performance meeting with the group, were edited into a previously taped show that included a comedy sketch by Eric Morecambe and Ernie Wise.