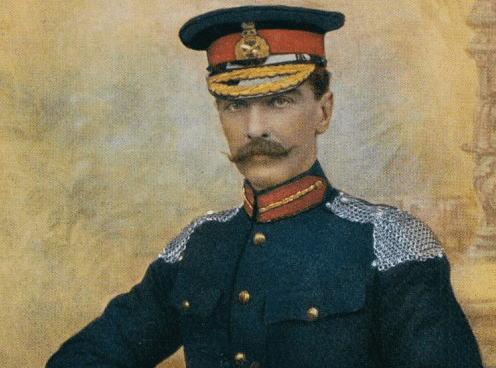 While the picture of the man depicting “Sgt. Pepper” in the Beatles “Sgt. Pepper’s Lonely Hearts Club Band” album looks like a character out of a story book, he was actually a real person. His name was James Melvin Babington, and author Bruce Spizer says his new book  “The Beatles and Sgt. Pepper: A Fans’ Perspective,” reveals his identity and a little of his history for the first time.

Spizer, who talked about the discovery and the book this week on the weekly Beatles podcast “Things We Said Today,” credited the find to Frank Daniels, who wrote an essay for the book on Babington under the pseudo name Max Gretinski. “Both of us try to top each other with finding obscure stuff that I jokingly say only you, me and 15 other people in the world will care about,” Spizer told the radio show. Babington’s identity was confirmed by one of the men who were involved with creating the cover, Spizer said.

In the essay, Gretinksi (Daniels) details some of Babington’s military history, including his service in the 16th Queen’s Lancers in the Second Boar War and the First Calvary Brigade in South Africa. While much wasn’t known about his history in 1967, Babington’s face was, the essay says, because it was included in the book “Celebrities of the Army.”

“You knew about Beatle cards, but in the UK they had military history cards. And Major Gen. Babington was also one of these people that was on a card,” Spizer said. “So I think the artists got the idea to have the ‘Sgt. Pepper’ cutout card from those cards and out of those cards picked this one as their model.”

And there’s no question about whether the picture in the “Sgt. Pepper” album is Babington. The book includes side-by-side pictures of Babington and the mythical Sgt. Pepper. “As they said in ‘Yellow Submarine,’ the resemblance is uncanny,” Spizer quipped.

The discovery comes on the heels of the release of several CD sets by the Beatles May 26 that include a new remix of “Sgt. Pepper’s Lonely Hearts Club Band” by Giles Martin, son of the late Sir George Martin, and Sam Okell based on the original monaural mix which was preferred by the Beatles and that had several differences from the stereo mix. The largest set, six discs with four CDs, a DVD and a Blu-ray disc, includes the remix, discs of album outtakes, rarities and a monaural version of the album, plus video content.