Although the Beatles recorded for EMI’s Parlophone label in the U.K., sometimes the group’s songs were released in other parts of the world prior to release in the U.K. on Parlophone.

What two songs, recorded in Paris, France, on January 29, 1964, were first issued in countries other than England? What were the first two countries to issue the songs, and on what records did they appear in those countries?

The Beatles recorded German-lyric versions on “I Want To Hold Your Hand” and “She Loves You” on January 29, 1964. EMI’s German branch wrongly believed that Germans would not buy Beatles records unless they were sung in German. The songs were first released in Germany on March 5, 1964, on the single “Komm, Gib Mir Deine Hand” c/w “Sie Liebt Dich” on the Odeon label. “Sie Liebt Dich” was issued in the U.S. on or about May 21, 1964, by Swan Records, which only had the rights to two Beatles songs, “She Loves You” and “I’ll Get You.” Swam paired “Sie Liebt Dich” with “I’ll Get You” on a single that identified the group as “Die Beatles” on the German-lyric side. The single, which peaked at #97 in the “Billboard Hot 100,” was withdrawn from the market after Capitol threatened to sue Swan. “Komm, Gib Mir Deine Hand” was first issued in the U.S. on the Capitol album “Something New” on July 20, 1964. The songs were not issued in the U.K. until 1978 on the “Rarities” disc that was part of an EMI box set of Beatles albums. Learn more about the recording of the songs and how the German lyrics differed from the English words to the song on Pages 119 – 120 on “Beatles For Sale on Parlophone Records.” Learn more about the U.S. release of the songs on Pages 19 – 20 of Beatles For Sale on Parlophone Records” and on Page 40 of  The Beatles’ Story on Capitol Records, Part Two: The Albums “I’m Only Sleeping,” “And Your Bird Can Sing” and “Doctor Robert” were recorded during the “Revolver” sessions. When Capitol found itself three songs short for its upcoming compilation LP “Yesterday And Today,” the company persuaded George Martin and EMI to send the songs to the Capitol Tower. “Yesterday And Today” was issued in early June, 1966, while British fans did not hear the songs until their appearance on the U.K. version of “Revolver,” which was issued on August 5, 1966. LEARN MORE about the U.K. “Revolver” album on pages 210 – 222 of  Beatles For Sale on Parlophone Records. and about the Capitol’s “Yesterday And Today” LP, including the true story behind the Butcher cover, on pages 111 – 136 of The Beatles’ Story on Capitol Records, Part Two: The Albums When Capitol Records needed help coming up with enough songs for a summer 1965 Beatles album, tell me what Lennon-McCartney song was supplied by EMI and on what U.S. and U.K. albums did the song first appear?

“Tell Me What You See” was recorded during the “Help!” sessions on February 18, 1965. The song made its debut on the Capitol album “Beatles VI” on June 14, 1965, and then its U.K. debut on the “Help!” LP on August 6, 1965. (See the prior two questions for the three other songs recorded during the “Help!” sessions that also first appeared in the U.S.) Learn more about the “Beatles VI” album on pages 77 – 85 of The Beatles’ Story on Capitol Records, Part Two: The Albums and about the song on page 191 Beatles For Sale on Parlophone Records. 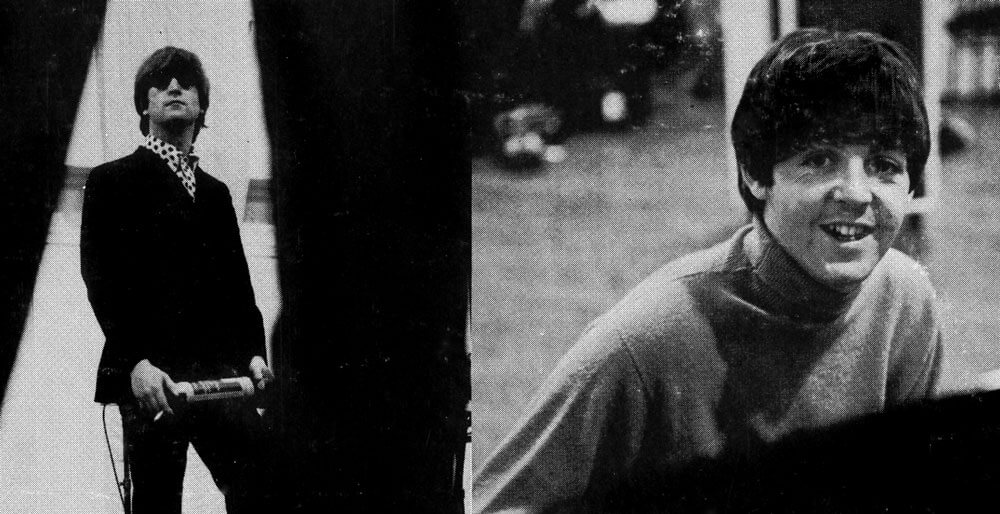 What George Harrison song was released in the United Stated nearly two months prior to being issued in the U.K. and on what U.S. and U.K. albums did the song first appear?

“You Like Me Too Much” was recorded during the “Help!” sessions on February 17, 1965. When Capitol Records needed additional tracks for a planned early summer 1965 album, the company asked EMI for help. In addition to having the Beatles quickly record two Larry Williams’ rockers, “Bad Boy” and “Dizzy Miss Lizzy” (see last week’s question), EMI provided two completed tracks that would not be used in the Beatles second movie. George’s “You Like Me Too Much” was one of these songs, making its debut on the Capitol album “Beatles VI” on June 14, 1965. The song make its U.K. debut on the “Help!” LP on August 6, 1965. Learn more about the “Beatles VI” album on pages 77 – 85  of The Beatles’ Story on Capitol Records, Part Two: The Albums and about the song on page 190 of Beatles For Sale on Parlophone Records. What two songs were recorded specifically for Capitol Records for U.S. release and on what records did they first appear in the U.S. and in the U.K.?

“Dizzy Miss Lizzy” and “Bad Boy” were both recorded on May 10, 1965, during an evening break from the filming of “Help!”  The two songs, written and first recorded by Larry Williams, were specifically recorded for an upcoming Capitol album which was called “Beatles VI” upon its release on June 14, 1965. Neither song was originally intended for release in the U.K. When the Beatles found themselves one track short for their upcoming “Help!” LP on Parlophone, “Dizzy Miss Lizzy” was added as the closing number on the album, which was issued on August 6, 1965. “Bad Boy” first appeared in the U.K. on “A Collection of Beatles Oldies,” which was a hits collection issued on December 9, 1966. It was the only “new” song on the album. LEARN MORE about these songs on pages 192 and 370 of Beatles For Sale on Parlophone Records and about the Capitol’s “Beatles VI” LP on pages 76 – 85 of The Beatles’ Story on Capitol Records, Part Two: The Albums. ANSWER: “Long Tall Sally” and “I Call Your Name” were both recorded on March 1, 1964, during the sessions for “A Hard Day’s Night.” The two songs first appeared on “The Beatles’ Second Album,” which was released in the U.S. by Capitol Records on April 10, 1964. They were first issued in the U.K. on June 19, 1964, on the “Long Tall Sally” EP, which topped the EP charts for six straight weeks. LEARN MORE about this great EP on pages 369 – 371 of Beatles For Sale on Parlophone Records. and about the Capitol LP on pages 22 – 35 of The Beatles’ Story on Capitol Records, Part Two: The Albums.