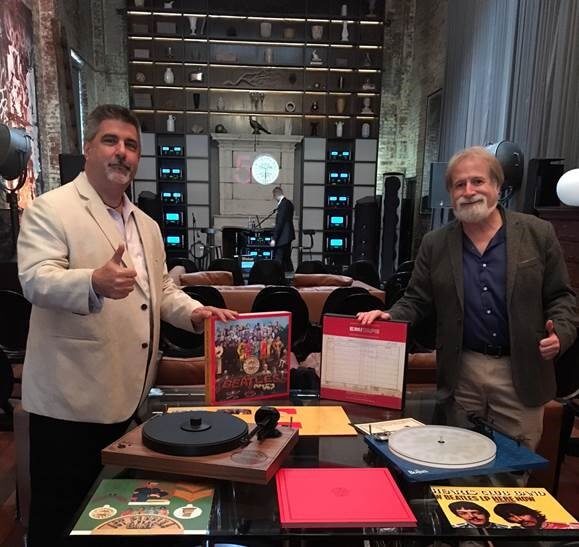 Following some brief introductory remarks from Apple CEO Jeff Jones, Giles Martin explained the reasoning behind (and process of creating) the new stereo remix, demonstrating certain techniques in comparing the mono mix, original stereo mix and the new stereo remix. Martin explained that while the Beatles, his father (Beatles producer George Martin) and engineer Geoff Emerick spent considerable time on the mono mix, they had little concern for the original stereo mix, as mono was still the dominant format, particularly in the UK. Many fans – and the Beatles themselves – have cited the mono mix as the definitive presentation of the album (John Lennon famously said “you haven’t heard ‘Sgt. Pepper’ until you’ve heard it in mono”). Using the mono mix as the template, Martin and Abbey Road engineer Sam Okell have created a new mix that presents the album the way the Beatles would have done so in 1967 had they cared about making a proper stereo mix and had access today’s technology.

Among the handful of tracks from the forthcoming box set that Martin demoed was the legendary attempt by the Beatles to end “A Day In The Life” with a unison vocal hum (more accurately “Aum”) of the note “E.” As Martin pointed out, even geniuses have bad ideas sometimes; the trick is to use the good ones – something the band of course did with the grand final chord being played on multiple keyboards in the final master. He also played the 1967  mono and stereo mixes of “She’s Leaving Home,” demonstrating the vari-speed technique applied to the mono mix only, resulting in the mono version being a semi-tone higher in pitch as a result of being “sped up.” Now given the same vari-speed treatment, the song is perhaps the best example of the original mono template being followed for the new stereo mix. Another example is the artificial double-tracking applied to “Lucy In The Sky With Diamonds” that was missing from the original stereo mix.

After setting the stage, Martin presented the entire 38-minute stereo remix that will be the centerpiece of the anniversary editions. The differences between the 1967 and 2017 mixes were immediately apparent. With better placement of the instruments, Paul’s bass and guitar parts punched through the speakers on the title track, as did Ringo’s drumming. On “With A Little Help From My Friends,” Ringo’s lead vocal was dead center in the spectrum, with John, Paul and George’s backing vocals surrounding him left and right. This was achieved by separating the double-tracked backing vocals into separate channels, working to great effect. On “Fixing A Hole,” you can clearly hear there are two harpsichords. “Being For The Benefit Of Mr. Kite!” is a song that should have sounded better in stereo than in mono with its swirling sounds; however, the mono mix was vastly superior. That is no longer the case. The new stereo mix breathes new life into the circus effects. 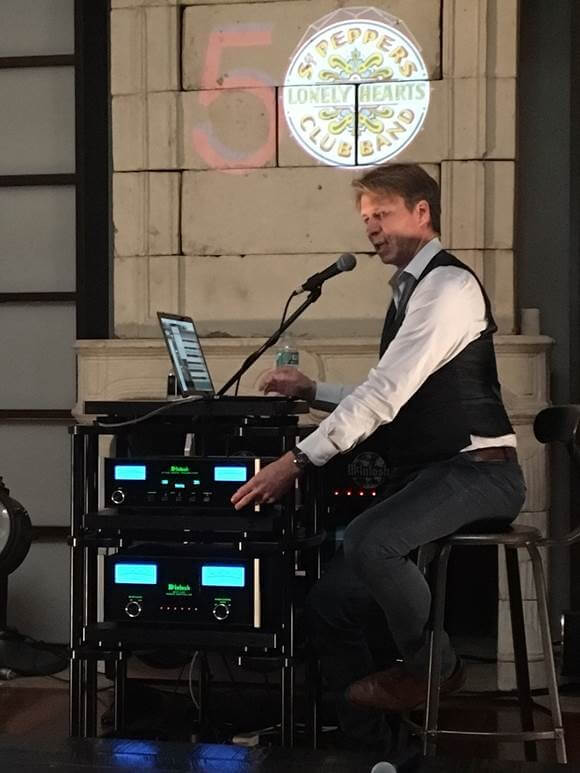 On “Within You, Without You,” the Indian percussion and string instruments benefit from greater separation, providing more clarity and definition. “Good Morning, Good Morning” has the guitars with much more punch and presence, punctuating the verses and delivering a harder rock sound. The “Sgt. Pepper” reprise is another example of the mono template being followed, with the audience effects and Paul’s scat vocal given more prominence than on the original stereo mix. As expected, “A Day In The Life” was breath-taking. Certain nuances, such as Paul’s piano playing and the orchestral build-up, benefit from the new placement of instruments.

Overall, the new stereo remix highlights the brilliance of the group’s singing (greater clarity on lead and harmony vocals) and playing on the album. Paul’s melodic bass lines, stinging lead guitar and keyboards are heard as never before. Ringo’s drums are a revelation, demonstrating his creativity and uncanny ability to play the perfect drum part for each song. As with the rhythm section, the interplay between George and John is evident throughout, particularly on “Lucy In The Sky With Diamonds,” with Harrison’s guitar lines fluidly echoing Lennon’s lead vocal.

Following the album presentation, Martin and Jones took questions from those in attendance on a variety of topics, including the decision to include “Penny Lane” and “Strawberry Fields Forever” in the anniversary edition. Although the release of the songs as a single months ahead of the album precluded their inclusion on the LP, they were included as part of the anniversary edition due to their having been recorded during the same sessions. The deluxe edition demonstrates how “Strawberry Fields Forever” evolved by including multiple takes and a new stereo master. For good measure, the set also includes the mono Capitol promotional single version of “Penny Lane” ending with the additional 7-note piccolo trumpet flourish.

As was the case 50 years ago, great care and attention to detail was given to the packaging, which was on display. Fans and critics alike should be pleased with the anniversary edition. Many in attendance commented it was like hearing the album again for the first time