The 2012 season premiere of the television show History Detectives shall feature a story on Beatles autographs. The program will be broadcast by PBS on Tuesday, July 17, 2012, at 9:00 PM EDT/8:00 PM CDT (check local listings to confirm the station in your market).

The Beatles segment, filmed in Miami Beach last January 2012, has Tukufu Zuberi using his detective skills to determine if a set of autographs from February 1964 are really those of the Fab Four. Tukufu is given a tour of the Deauville Hotel by Beatles author/historian Bruce Spizer, who shows him where the Beatles stayed and played while in Miami Beach for their February 16, 1964 appearance on The Ed Sullivan Show. Viewers will get to see the behind the scenes locations of the Deauville and learn a bit of Beatles history along the way.

History Detectives, now entering its tenth season, is an entertaining and educational series that explores the complexities of historical mysteries, searching out the facts, myths and conundrums that connect folklore, legends and interesting objects. Segment host Tukufu Zuberi is a professor of sociology and Director of Africana Studies at the University of Pennsylvania. Bruce Spizer has written eight critically-acclaimed books on the Beatles and does consulting for EMI/Capitol Records on Beatles projects. The season opener will have a rock ’n’ roll theme, with other stories on what may or may not be Bob Dylan’s first electric guitar and a painting allegedly drawn by Frank Zappa.

The Beatles relaxing by the pool at the Deauville Hotel in Miami Beach during their February 1964 visit, which shall be the subject of a History Detectives story to air on July 17.

During their stay at the Deauville Hotel in Miami Beach, members of the Beatles were assigned three rooms with two beds each. Who slept in each of the these rooms?

Bonus question: What floor were the Beatles on?

Bonus question for those obsessed with Beatles trivia: What were the room numbers?

Paul and Ringo shared a room. John was with his wife, Cynthia. George, who had hopes of a private room, found himself stuck with New York DJ Murray the K, who followed the group to Miami Beach for a few days. When Murray the K returned to New York, Sgt. Buddy Dresner of the Miami Beach Police Department took his bed. The group stayed on the 12th floor, with Paul and Ringo in Room 1219, George next door in Room 1218 and John down the hall in Room 1211. 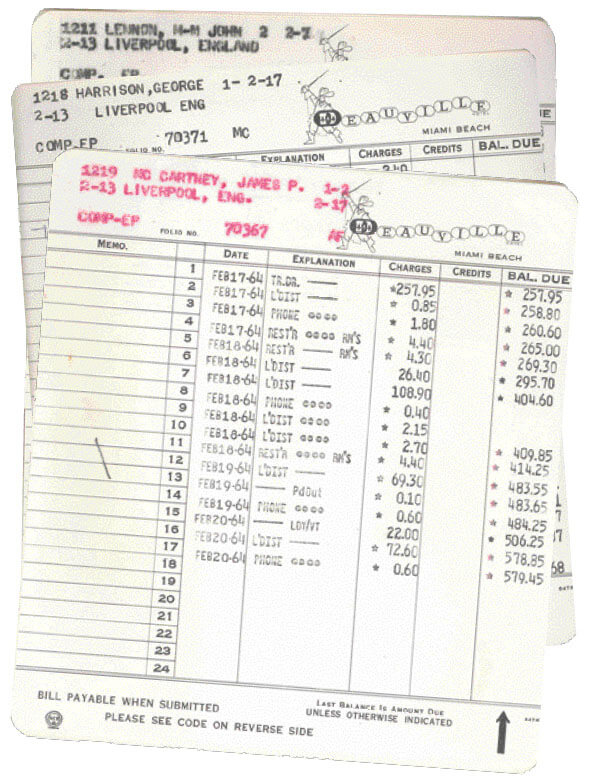