Memories of Ali and the Beatles 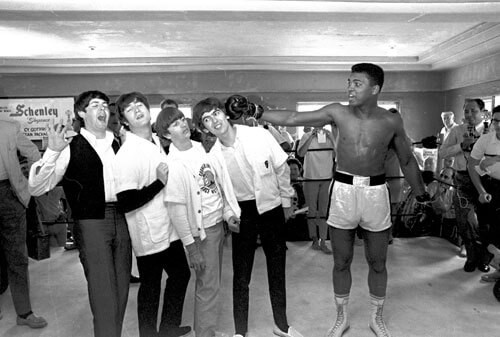 Saturday morning, June 4, 2016. I read the news today, oh boy, on the front face of my iPhone. There were push notifications from The New York Times and CBS News. Muhammad Ali was dead at 74. He had died the night before. It was not a surprise to me as the media had warned of the seriousness of his condition. Still, it saddened me.

I turned on the television to see how his death was being reported. CNN was live in Louisville, with a reporter standing on the plaza outside the Muhammad Ali Center. Although a steady rain was coming down, people of all ages and races mingled through the plaza, some leaving flowers.

I had been standing at the exact same location the weekend before, not knowing that The Greatest would soon be gone. I was not there to see the museum. I had been through it several times before. I was at the Ali Center as a guest speaker for Abbey Road on the River. I had given presentations on the Beatles albums released by Capitol Records and on the Butcher cover inside the Ali Center’s auditorium. I was set up in the lobby selling my books. At the front of my table, I placed a copy of “The Beatles Are Coming!” out of respect for where I was, the book was opened to a page featuring an iconic February 1964 photo of Ali, then known as Cassius Clay, playfully pretending to land a knockout punch on the Fab Four.

The text in my book gave the following account:

On Tuesday, February 18, the Beatles attended the workout of Cassius Clay. The meeting was set up by fight promoter Harold Conrad, who attended The Ed Sullivan Show with Sonny Liston. According to Conrad, Liston was not impressed with the band and commented, “Is these bums what this fuss is all about? My dog plays better drums than that kid with the big nose.” After the show, Sullivan arranged for Conrad to meet the Beatles in their suite. When the group expressed interest in meeting Clay, Conrad invited them to attend the boxer’s workout at the Fifth St. Gym.

UPI reported that the meeting between “Britain’s bush-haired Beatles” and Cassius Clay “ended up in clowning, off-key pandemonium” and that “boxing and singing probably were set back 100 years.” Clay, who often recited poetry to predict the outcome of his fights, boldly stated “When Liston reads about the Beatles visiting me, he’ll be so mad I’ll knock him out in three.” For the first time, Cassius called someone other than himself “great” by admitting, “Man, you guys are the greatest. The whole world is shook up about you.”

The meeting was attended by many reporters and photographers. Clay took charge and set up several posed shots of him triumphant over the group.

As I continued to watch coverage of Ali’s life, my mind shifted from the weekend before to early 1964. At the time, I was captivated by the incredible music coming from four young lads from Liverpool and a brash young boxer named Cassius Clay. My father, whose musical tastes centered on big band music and singers such as Frank Sinatra and Tony Bennett, couldn’t understand why I was constantly playing Capitol’s “Meet The Beatles!” album in my room. And while he found Clay’s poetry and cockiness amusing, he, like most of the sport’s world, gave Clay no chance of beating Sonny Liston in their upcoming fight.

On the night of February 9, 1964, my family gathered in our living room to watch the Beatles perform on The Ed Sullivan Show. Although my father did not appreciate the music, he was curious to see what all the excitement was about. I felt somewhat vindicated when Ed Sullivan said all those nice things about the group and the audience screamed its approval. While I knew my dad would never appreciate Beatles music, at least he had a better understanding of what I was drawn to. Decades later when I began writing books on the Beatles, my dad would call me when the Beatles were in the news. He and my mom attended presentations I gave on the Beatles.

A little over two weeks later, I was in my parent’s bedroom listening to a live radio broadcast of Clay’s fight with Sonny Liston. My dad politely warned me that my hero was most likely going to be knocked out by the powerful Liston, who had won the championship in 1962 by knocking out Floyd Patterson in just over two minutes. Once again I was vindicated when Clay danced around the ring, avoiding Liston’s mighty fists and landing jab after jab on Liston. After six rounds, Liston was a beaten man, choosing not to answer the bell for round seven. Fourteen years later my dad took me to the Louisiana Superdome to see Ali regain the heavyweight boxing title for the third time. I guess it’s only natural that Ali’s death would bring back memories of the Beatles and my father, who died ten years ago.

As the coverage on CNN shifted back to the plaza at the Ali Center, I saw more and more people stranding at the exact spot where I, just a week earlier, had been listening to some of the greatest music ever written played by some pretty darn good tribute bands.

On the morning of June 9, as the tributes for Ali continued in preparation of his memorial service, I received an email with an attachment picture of me playing a Beatles song on a Gretsch Rancher Falcon Jumbo acoustic-electric guitar in front of my table in the lobby of the Ali Center. In the background was a picture of Ali, looking over my shoulder.