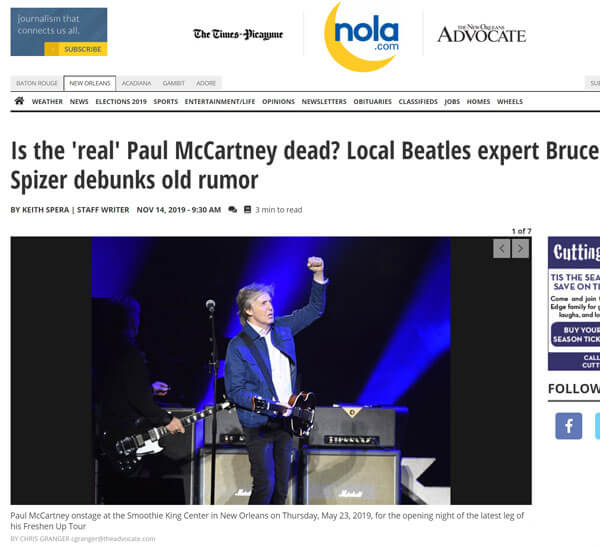 Was that guy who sang all those Beatles songs at the Smoothie King Center in May really Paul McCartney?

Not if you subscribe to the “Paul is dead” conspiracy theory that first emerged in the late 1960s, around the time the Beatles released “Abbey Road.”

As one of the world’s foremost Beatles experts, local tax attorney and author Bruce Spizer is well-acquainted with the “Paul is dead” rumor. He writes about it in his new book, “The Beatles Get Back to Abbey Road.”

And, he’ll elaborate on the rumor during a discussion Thursday, Nov. 21 at 7 p.m. at the Jefferson Parish East Bank Regional Library (4747 W. Napoleon Ave. in Metairie). Admission is free.

If anyone is qualified to shed light on the doubts about McCartney’s existence, it’s Spizer.

His Beatles obsession took root as a child at the height of the mid-‘60s British Invasion and never waned. As a successful attorney and accountant, he built an extensive collection of Beatles memorabilia, promotional items and first-edition records.

He has written and self-published a series of well-regarded books about the minutiae of Beatles albums, singles and the advent of Beatlemania. The level of exacting detail is exhaustive; Spizer is a diligent, meticulous researcher.

Such is his reputation as a fount of Beatles knowledge that he was commissioned to write the questions for a Beatles edition of “Trivial Pursuit.”

In a twist that would have blown the 16-year-old Spizer’s mind, he’s a consultant for Capitol Records, EMI/Universal Music Group and the Beatles’ own Apple Corps Ltd. He contributed to 2009’s “The Beatles: The Original Studio Recordings,” a 16-CD boxed set of the band’s remastered catalog, and 2017’s official 50th-anniversary reissue of “Sgt. Pepper’s Lonely Hearts Club Band.”

“The Beatles Get Back to Abbey Road” is his 11th Beatles book. He’s working on his next one, about the “Let It Be” album.

After that, he plans to maybe cover two albums in a single book. “I don’t really want to do another 12 books,” he said.

His new “Abbey Road” project is a carefully curated scrapbook/compendium of information and images, including historical and musical context, reviews, fan recollections, detailed track information, etc. Spizer solicited essays from other writers, including Fox Feynman’s thoughts on how the “Paul is dead” phenomenon followed the classic contours of a conspiracy theory.

According to the theory, McCartney died in a car crash in 1966. The other Beatles and producer George Martin conspired to keep it a secret. They recruited a McCartney lookalike but included clues about the “real” Paul’s death in subsequent albums.

McCartney was, in fact, no stranger to vehicular mishaps. He was banged up in a moped accident in late 1965. His Mini Cooper was totaled in a car crash in January 1967, but a friend was driving it; McCartney wasn’t even in the car.

His decision to remain largely out of the public eye for much of 1969 sparked all sorts of speculation, especially on college campuses.

A headline in the Sept. 17, 1969 issue of Drake University’s student newspaper asked, “Is Beatle Paul McCartney dead?” The writer concluded that “an amazing series of photos and lyrics on the group’s albums point to a distinct possibility that McCartney may indeed be insane, freaked out, even dead.”

As traced by Spizer, the rumor spread to other college campuses, then a Detroit radio station. Fred LaBour, a writer at the University of Michigan’s paper, then concocted a long, truly “fake news” article alleging “proof” of the conspiracy.

The phrase “turn me on, dead man” could be heard when the song “Revolution No. 9” was played backward. Only McCartney was barefoot on the cover of “Abbey Road.” The “Magical Mystery Tour” album contained “I Am the Walrus” and “walrus” was the Greek word for “corpse.”

“We didn’t have Google back then — how could we know?” Spizer joked.

LaBour’s article, Spizer said, was “tongue in cheek, but many people believed it. LaBour played along and had his 15 minutes of fame.”

The mainstream media then got involved. A reporter and photographer from Life magazine finally tracked down McCartney at his farmhouse in Scotland. He and his family appeared on the cover of the Nov. 7, 1969 issue of Life alongside the tagline, “Paul is still with us.” Rolling Stone also debunked the rumor with the headline, “Paul is not dead.”

Doubters didn’t believe that, then or now.

In his own “Paul is dead” essay from “The Beatles Get Back to Abbey Road,” Spizer recounts how local radio station WTIX decided to do a special about the rumor. The station’s promo man, Bob Robin, enlisted singer Lenny Capello to come up with a theme song.

Capello had notched a couple of local hits with “90 Pound Weakling” and “Cotton Candy,” and would later release “Tippicaw Calley” under the name Lenny Damon & the Bah Humbug Band.

For the WTIX McCartney promotion, Capello co-wrote “Brother Paul.” It was released as a single credited to Billy Shears & the All Americans, a reference to a character from “Sgt. Pepper’s Lonely Hearts Club Band.”

In the book, Spizer “makes something fun out of (the rumor) without going in-depth. It has enough to give readers the basics.”

At Beatles conventions, he often encounters true believers who insist the “real” Paul is dead.

“They say, ‘I know you do some work for them and have to say the party line, but deep down, don’t you believe it?’