(the topic of his latest book)

followed by a screening of 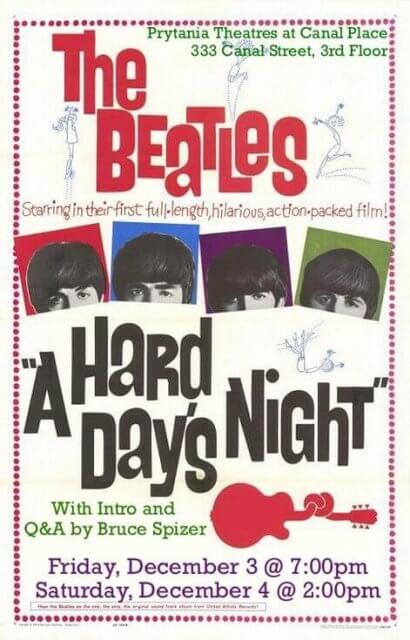 Beatles author/historian Bruce Spizer give an audio/visual presentation on his latest book, The Beatles Magical Mystery Tour and Yellow Submarine, at the Prytania Theaters at Canal Place on Friday, December 3, at 7:00pm and on Saturday, December 4, at 2:00pm.  Bruce will be signing copies of his latest book as well as other titles in his series of the Beatles albums.

The presentation will be followed by a screening of A Hard Day’s Night.

In April 1967, the Beatles finished recording their groundbreaking album, Sgt. Pepper’s Lonely Hearts Club Band. But rather than taking a well-deserved break, the group immediately soldiered on with several remarkable post-Pepper projects, including their self-produced TV spectacular Magical Mystery Tour and their feature-length cartoon Yellow Submarine. The music for these films showed an incredible evolution from the rock ’n’ roll sounds of Beatlemania that swept the world in 1964. Similarly, both of these films were radical departures from the group’s first film, A Hard Day’s Night.