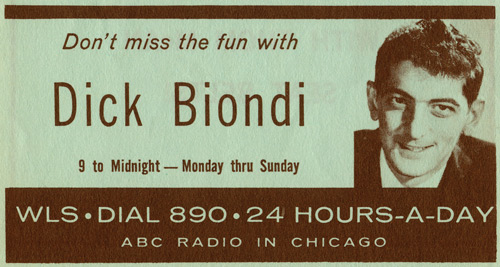 Click here to listen to Dick Biondi (opens in separate window so you can switch back to this window and read while it plays). Scroll down for full YouTube version 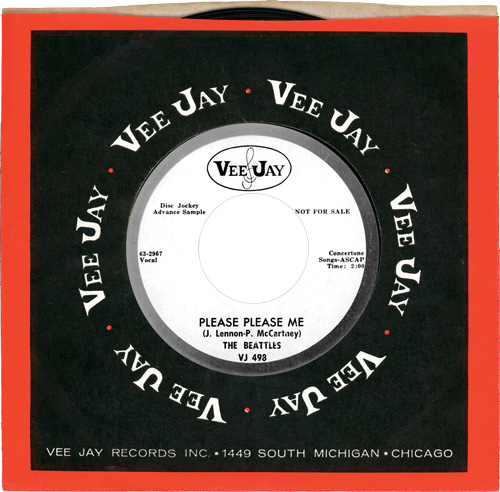 It was a cold Saturday night  in Chicago on February 23, 1963. During the day the temperature got up to 25̊ Fahrenheit, but at night it headed down to the low teens. The wind was at about eight miles per hour, blowing snow and ice pellets through the air. Hockey fans kept warm inside Chicago Stadium, the “Madhouse on Madison,” watching the Blackhawks defeat the visiting Detroit Redwings 3-2 in a game that had no fights. Over at the Chicago Coliseum, the struggling Chicago Zephyrs of the NBA were about to lose to the San Francisco Warriors by a score of 92 – 88. (The team would leave Chicago after the season and become the Baltimore Bullets. Chicago would get a new team, the Bulls, in 1966.)

Many of those who chose to stay inside that weekend had seen the birth of Pebbles Flintstone on the Friday night broadcast of the popular ABC prime-time cartoon show, The Flintstones, on Channel 7 (then known as WBKB before becoming WLS in 1968). Saturday night on Channel 7 started with the cartoon show Beany and Cecil at 7:00, followed by the cowboy series The Roy Rogers and Dale Evans Show at 7:30 and the sitcom Mr. Smith Goes To Washington at 8:30. But by 9:00 pm, many youngsters had seen enough TV, having no desire to watch The Lawrence Welk Show, a musical variety program hosted by bandleader/accordionist Lawrence Welk. It was time to listen to radio station WLS and the Dick Biondi Show.

Fortunately a tape of Biondi’s February 23, 1963, broadcast has surfaced. It provides a fascinating look back into Top Forty radio in the sixties.

That evening, Biondi was spinning several recently-released discs. The tape opens with Gene Pitney’s Mecca, a pop tune with a Middle Eastern sound. Pitney had scored a handful of hits in 1962, including Town Without Pity (#13), (The Man Who Shot) Liberty Valance (#4) and Only Love Can Break A Heart (#2). His previous release, Half Heaven Half Heartache, had recently peaked at #12, so it was no surprise that program directors were willing to add Pitney’s song of “East meets West” love to their play lists before it had entered the charts.

After a commercial for Alfred Hitchcock’s latest film, The Birds, Biondi played another new disc, Steve Lawrence’s Don’t Be Afraid Little Darlin’. Lawrence was a pop singer married to singer Eydie Gorme, who was currently on the charts with Blame It On The Bossa Nova. Lawrence had  four top ten hits from 1957 – 1961, but his latest record was sure to get attention because he was just coming off of a number one single, Go Away Little Girl. As Lawrence’s pretty ballad comes to a close (at the 2:10 mark of the sound file), Biondi excitedly introduces the next new platter as “The Beatles and Please Please Me.” The Beatles first American single is followed by a record that had just entered The Billboard Hot 100 the week before, Johnny Cymbal’s Mr. Bass Man, a novelty tune featuring Ronnie Bright of the Valentines doing the bass vocal lines. (Cymbal would later strike it big with a #11 hit, the bubble gum music classic Cinnamon, released under the name Derek.)

A couple of weeks later, Please Please Me by the Beatles would peak at number 35 on the WLS Silver Dollar Survey. The other new songs would also make the local chart. Nationally it was a different story. While Billboard charted Mecca at #12, Don’t Be Afraid Little Darlin’ at #26 and Mr. Bass Man at #16, it ignored Please Please Me altogether. (For those looking for hidden meanings that aren’t there, Gene Pitney’s song was about Mecca the city, not Macca the Beatle, and Mr. Bass Man was about bass vocalists, not bass players like McCartney.)

Listening to the four songs on the tape from that evening shows how different the Beatles sounded when compared to other songs of the day. It might also explain why some America program directors and radio listeners overlooked the Beatles the first time around.

NOTE: The segment above from the February 23, 1963, Dick Biondi Show on WLS was edited from a portion of the show available on YouTube (below).