On July 24, 2014, the Recording Industry Association of America (the “RIAA”) added four singles and one album to its list of Beatles records that have been certified gold. Four of these records were also certified platinum. Although the RIAA website attributed these releases to Capitol, the list included the Vee-Jay album “Introducing The Beatles” and four singles that had been issued by Vee-Jay and its Tollie subsidiary in 1964. Beatlefan contacted Beatles author/historian Bruce Spizer in hopes of learning the story behind these new certifications.

What exactly did the RIAA do, and what does it mean?

The RIAA certified gold record status for the album “Introducing The Beatles” (VJ 1062) and the singles “Please Please Me” (VJ 581), “Twist And Shout” (Tollie 9001), “Do You Want To Know A Secret” (VJ 587) and “Love Me Do (Tollie 9008). All but “Do You Want To Know A Secret” were also certified platinum. Under current RIAA certification standards, albums and singles are certified gold if they achieve U.S. sales of over 500,000 units. Platinum certification represents sales of 1,000,000 units. 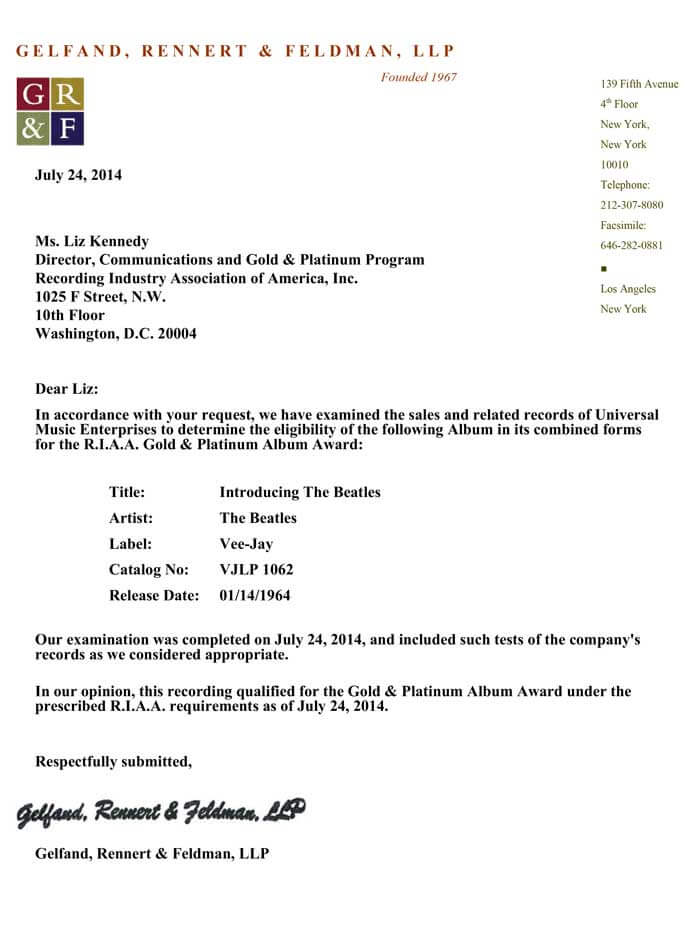 Why now, after all these years?

On August 23, 1964, Vee-Jay president Randy Wood presented John Lennon with gold record awards for these records after the Beatles press conference that was held before the group’s appearance at the Hollywood Bowl. Because Vee-Jay did not allow the RIAA to examine their accounting books, these records were never certified by the RIAA. With the fiftieth anniversary of the Vee-Jay gold record award presentation happening this year, it seemed appropriate to try and get these records officially certified gold by the RIAA. 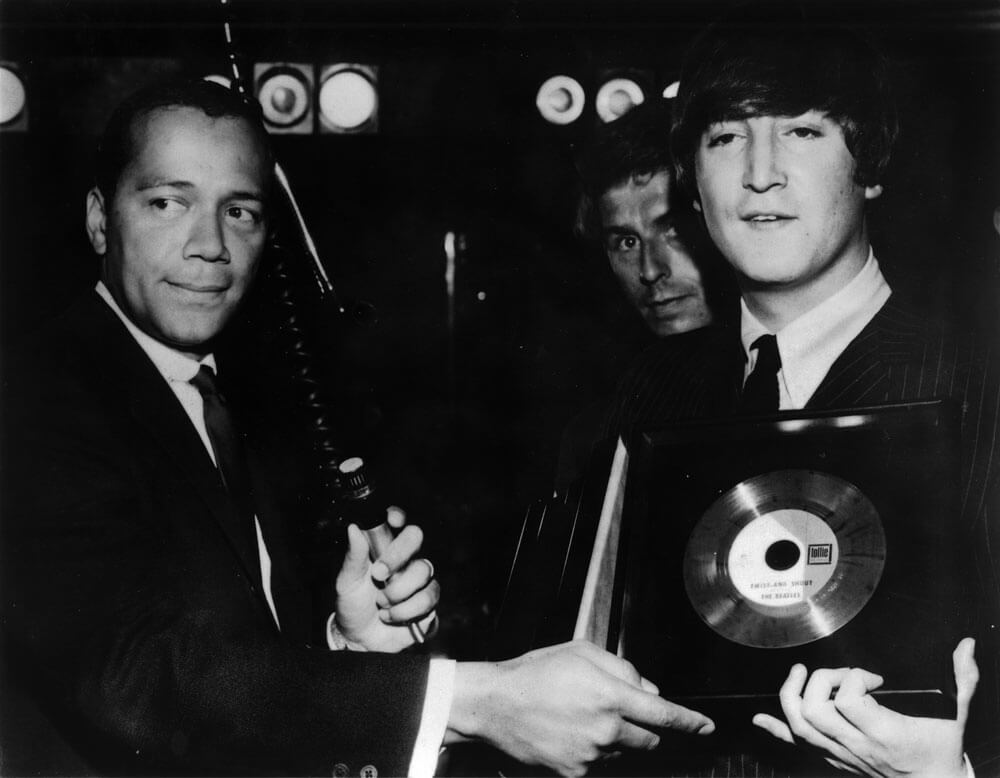 What part did you play in getting this done?

While researching my book “The Beatles Records on Vee-Jay,” I obtained numerous documents from the former comptroller of Vee-Jay. She had placed these papers in storage after purchasing the company out of bankruptcy in 1966. The documents included a summary sheet showing the sales of Beatles records reported by Vee-Jay to Capitol under a licensing agreement between the two companies that was part of the settlement of various lawsuits over the American rights to the Beatles. The summary sheet was backed up by quarterly reports, monthly reports and sales taken from invoices sent by Vee-Jay to its distributors. From these accounting work papers, I was able to determine sales for each of the Beatles records released by Vee-Jay. Realizing that these items provided documentation of the sales of these records, I contacted Apple to see if there was interest in getting the RIAA to certify the sales of the records in hope of obtaining gold and platinum status.

Was everyone (Universal-Capitol, Apple, etc.) on board with this?

Were there any problems that had to be overcome?

The RIAA initially expressed skepticism as to whether the records could be certified with documents that were 50 years old. After I discussed my documentation with Universal, the company assured the RIAA that the documentation I had was much more what is currently submitted by record companies. The RIAA then put me in contact with Gelfand, Rennert & Feldman, the CPA firm that reviews the documentation provided to the RIAA for certification requests. I flew to New York on July 21, 2014, to meet with the accountants at the firm who handle the RIAA certifications.

What did the CPA firm think of the documentation?

Two of the firm’s accountants on the certification team were considerably younger than me. Their auditing experience had been limited to the current format of computer files, so they were intrigued by my stacks and folders of green ledger sheets full of pencil notations. One of the firm’s senior partners, who started in accounting at the same time I did, attended the meeting. For him it was a wonderful visit back into the past. I explained how the sales summary sheet was supported by the quarterly and monthly reports. The firm then cross-referenced the documents to ensure that the sales reported on the summary reports were supports by the sales figures from the distributor invoices. It reminded me of the audits I did while working part-time at a CPA firm when I was in law school.

Did any surprises crop up in the research to support the certifications?

The sales figures used for the certification process were records actually sold and paid for less returns. Sales are also limited to the U.S. Because Vee-Jay provided distributors with one free single for every nine purchased and one free album for every six albums sold, the figures reported to Capitol were less than what Vee-Jay actually shipped to distributors. And, of course, there was incentive for Vee-Jay to underreport its sales because its payments to Capitol were based on sales. For these reasons, the certification figures were less than what was actually sold in stores. But even with the lesser sales figures, sales were still quite impressive. “Please Please Me” had reported sales of 1,072,448 copies. “Twist And Shout” had reported sales of 1,084,487 units. “Do You Want To Know A Secret” had reported sales of 920,881, although it shipped over one million units to distributors and almost certainly sold over one million copies in stores. “Love Me Do” had reported sales of 1,049,252. Sales of “Introducing The Beatles” were reported at 1,074,462. With the addition of the 346,489 in sales of the repackaging of the album as “Songs, Pictures And Stories of the Fabulous Beatles,” sales increase to 1,420,951. Based on these figures, all of the records were certified gold (500,000 units) and all but “Do You Want To Know A Secret” were certified platinum (1,000,000 units). 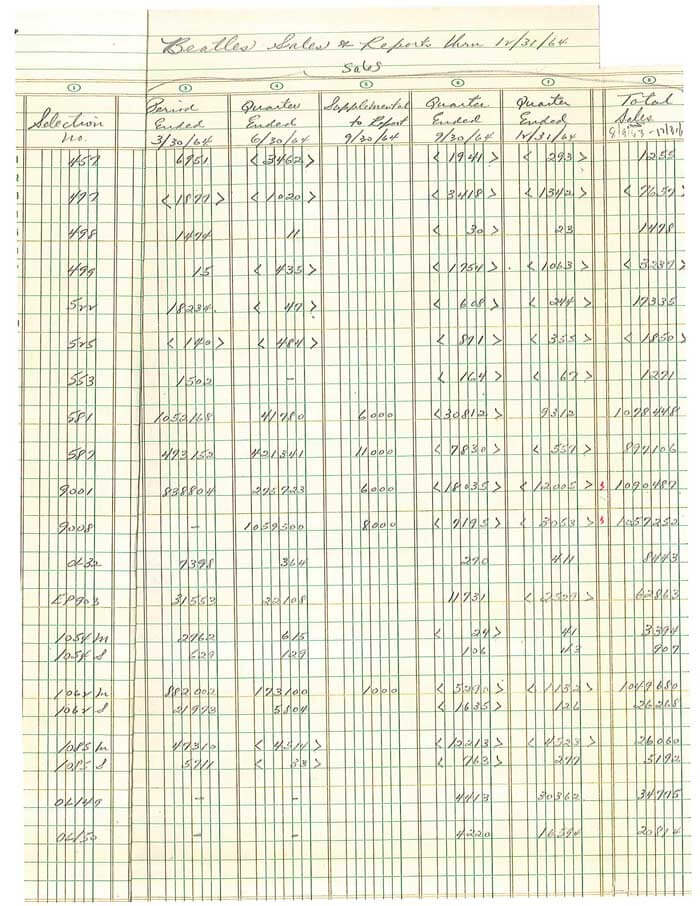 Did you discuss the certification process with anyone who was with Vee-Jay?

I told Randy Wood’s daughter, Michele, that I was attempting to get the Vee-Jay records certified by the RIAA. She told me she was there when her father presented the Vee-Jay “in-house” awards to John in 1964. She also told me a funny story about how she and her brother had discovered the awards a few weeks before the presentation while “exploring” in their parents closet. She thought the gold record awards were very cool and certainly got her finger prints all over them!

Are there any other Beatles releases left for which certification could or should be done?

Although the RIAA could only certified sales of 920,881 for “Do You Want To Know A Secret,” U.S. internet downloads for the song are in excess of 80,000. If those internet sales get certified and are added to the certified sales of the Vee-Jay single, then “Do You Want To Know A Secret” could be certified platinum. “She Loves You” sold about two and a half million copies in America, so if supporting documentation still exists and can be located, then that Swan single could be certified gold and double platinum. Although “Ticket To Ride” almost certainly sold over one million units in the sixties, for some inexplicable reason it was never certified. Perhaps one day Capitol will uncover documentation to get that single certified. There are several singles issued by Capitol in the sixties that might be eligible for an upgrade from gold to platinum status. And internet downloads may also lead to the certification of Beatles songs that were never issued as singles in the sixties.

Do you cover the Vee-Jay awards in any of your books?

I recently updated the 12-page chapter on the Vee-Jay gold record awards in the revised and expanded digital edition of “The Beatles Records on Vee-Jay.” In addition to the story behind the awards and their eventual certification, the chapter has pictures of the presentation and Ringo holding one of the awards in Brian Epstein’s London office. There are also images of two of the original Vee-Jay gold record awards from 1964, as well as part of the sales summary sheet used in the certification process and a letter from the CPA firm to the RIAA confirming the gold and platinum certification of “Introducing The Beatles.” The digital book can be ordered from my website, www.beatle.net .

This interview originally ran in the Sept.-Oct. 2014 issue of Beatlefan Magazine.