Today’s trivia covers the Beatle connection to the Super Bowl. It starts with an easy one and gets progressively harder.

Which Beatle has twice played at the Super Bowl?
What part of the game day program was he part of for each appearance?
What songs did he play at each Super Bowl?
Where were the games located and who were the participating teams?
What were the final scores of the games?
OK, so the last question is for the serious NFL fans, but hey, I’m ready for some football. 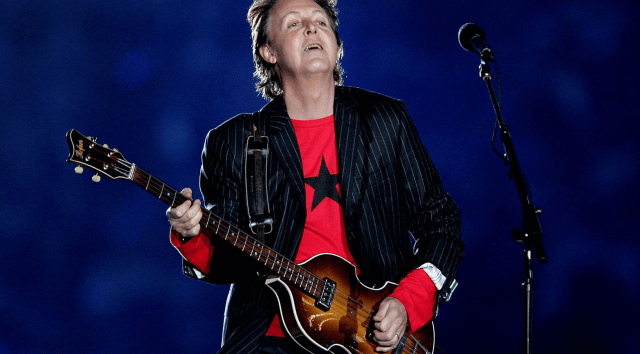 The former Beatle who has twice played at the Super Bowl is Paul McCartney. For his first appearance, he was part of the pre-game program; the second time he was the featured artist for the halftime show. Paul played the pre-game show before the first Super Bowl held after 9/11, performing his song inspired by the tragic events of that day, “Freedom.” He was interviewed after the halftime show (during which U-2 performed) and sang an impromptu version of “A Hard Day’s Night” with former quarterback  and broadcaster Terry Bradshaw. For his halftime show, Paul performed “Drive My Car,” “Get Back,” “Live And Let Die” and “Hey Jude.” His first Super Bowl appearance was in New Orleans, Louisiana, for Super Bowl XXXVI held on February 4, 2002, featuring the New England Patriots and the St. Louis Rams. His second appearance was in Jacksonville, Florida, for Super Bowl XXXIX held on February 7, 2005, featuring the New England Patriots and the Philadelphia Eagles. The final score for Super Bowl XXXVI was New England 20 St. Louis 17. Paul was pulling for New England because he thought it would be appropriate for a team called the Patriots to win the first post 9/11 Super Bowl. The final score for Super Bowl XXXIX was New England 24 Philadelphia 21.

Enjoy the shows at these links!