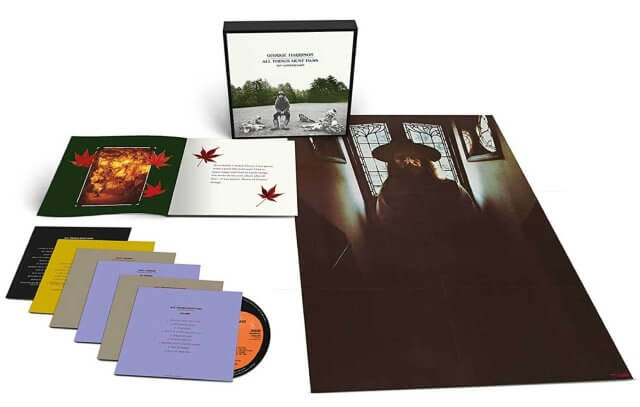 Back in 2001, for the 30th anniversary of All Things Must Pass, George Harrison looked back on the recording of the album and made the following observation: “I still like the songs on the album and believe they continue to outlive the style in which they were recorded. It was difficult to resist re-mixing every track. All these years later I would like to liberate some of the songs from the big production that seemed appropriate at the time, but now seems a bit over the top with the reverb in the wall of sound.”

On the 50th Anniversary 5 CD/Blu-ray edition of All Things Must Pass, Paul Hicks, working with Executive Producer Dhani Harrison, was given the opportunity to liberate the songs with a remix of the entire album and the release of three bonus discs of demos, outtakes and jams. By and large this 50th Anniversary edition is a liberating experience, although there will certainly be healthy debate as to whether particular songs were improved or not with the 2020 Stereo Mixes.

As one would expect, the new stereo mix sounds more contemporary, with more depth and clarity in the bass and overall increased clarity and prominence in the vocals, guitars and drums. There are also times when the keyboards or a tambourine shines through in a way not present in the original 1970 mix of the album made by co-producers George Harrison and Phil Spector. For those hoping that Paul Hicks would dismantle the Phil Spector Wall of Sound, they will often be disappointed. Spector’s trademark sound remains on songs such as “Wah-Wah,” “What Is Life” and “The Art Of Dying,” as well as the last two-thirds of “Let It Down,” although George’s vocal cuts through like a lighthouse beacon through the fog. Paul Hicks also dialed back the brass, which may or may not be to one’s liking. For example, the horns on “What Is Life” are important part of the song. They are much less prominent in the re-mix, which takes away from the power of the instrumental breaks. Songs like “My Sweet Lord” and “Apple Scruffs” sound crisp and clear, although those tracks sounded pretty darn good back in 1970.

With one exception, none of the album tracks have anything jump out of the speakers that will surprise the listener. The one song that caught me off guard was “Ballad Of Sir Frankie Crisp (Let It Roll).” On an instrumental break and towards the end of the song, there is a bass vocal refrain of “Roll Sir Frankie Crisp” or “Oh Sir Frankie Crisp” (that was on the demo recorded for the song). While I enjoyed hearing this discarded bit the first time around, upon further review I think that this vocal should not have been brought up in the mix on the proper album track, but rather that this remix should have been on the bonus disc of studio outtakes.

Putting personal preferences and small quibbles aside, the 2020 Stereo Mixes provide an excellent listening experience. And for those with a Blu-ray player and an advanced audio system, the Blu-ray sixth disc is a sonic delight, presenting the album in multiple sound formats including PCM Stereo, DTS-HD master audio 5.1, and Dolby Atmos.

But the real liberation of the songs is found on the demo discs. Disc Three contains demos from May 26, 1970, with George backed by Klaus Voormann on bass and Ringo Starr on drums, while Disc Four has George’s solo demos from May 27 done to preview songs for Phil Spector. Nearly all of the songs on the solo disc feature George on acoustic guitar. Because these tracks were recorded at Abbey Road, the sound is immaculate. Listening to these discs brings home the point that George had quite a stash of excellent songs ready to go once given the opportunity to have his songs recorded.

George’s liberation from the Beatles freed him from the two-to-three tracks per disc limitation he had faced while a part of the greatest show on earth. Several of the tracks on All Things Must Pass were songs that the Beatles showed little interest in, including “Let It Down,” “Hear Me Lord” and “Isn’t It A Pity.” Although the band spent considerable time on “All Things Must Pass” early in the Get Back sessions, they never really got into the song. “Wah-Wah” was written by George on the day after he quit the Beatles and the Get Back sessions on January 10, 1969. All of the songs recorded for All Things Must Pass are on the demo discs, enabling one to put together a DIY version of album with the songs fully liberated from Phil Spector’s production. It makes a fascinating listening experience and one well worth the time spent to program and burn the disc.

There are also demos of 11 Harrison compositions and a Bob Dylan song that were not included on the album. One of those, “I Live For You,” was recorded for the LP, but did not make the cut. The song was added as a bonus track on the 2014 version of All Things Must Pass included in the George Harrison box set of albums, The Apple Years. “Sour Milk Sea” had been previously recorded by Jackie Lomax for an Apple single produced by Harrison. “Window Window” was played by George during the Get Back sessions. Harrison later recorded “Beautiful Girl” for his 1976 album 33 1/3 and Dylan’s “I Don’t Want To Do It” in 1984 for the soundtrack to the film Porky’s Revenge.

One of the more interesting demos is “Going Down To Golders Green,” which was recorded with Klaus and Ringo. The trio perfectly mimics the Elvis Sun sound and are clearly having fun in the studio. The booklet to the album shows a list of potential songs for the album that identifies the track as  “Baby Let’s Play Golders Green,” an obvious reference to the Elvis Sun recording of “Baby Let’s Play House.” “Om Hare Om (Goplala Krishna)” is a Krishna-influenced song reminiscent of “Hurdy Gurdy Man” by Donovan. Other demos include “Dehra Dun,” “Cosmic Empire” and “Mother Devine.”

Disc Five, containing session outtakes and jams, is an entertaining listening experience that provides insights into how the songs evolved and ideas that were tried but ultimately discarded. The disc opens with a humorous slice of “Isn’t It A Pity” in which George complains about the pain of having to record multiple takes of the songs. There are first takes of “Wha-Wah,” “Art Of Dying,” “What Is Life” and “Let It Down, “ as well as the Apple Jam track “It’s Johnny’s Birthday.” It’s interesting to hear how these songs were first approached by the studio band and to hear them without the horn parts that at times seemed overbearing. “Run Of The Mill” is a later recording, Take 36, full of harmony guitar runs (similar to what would later appear on recordings by the Allman Brothers Band) not found on the finished master. Take 5 of “Hear Me Lord” turns into an extended jam that extends the song to nine and a half minutes.

The disc contains a pair of jam tracks, including one with a Harrison vocal. “Down The River (Rocking Chair Jam)” has George doing a Jimmie Rodgers-style vocal, complete with yodels, with a Dixieland Jazz backing from the horn section. It’s easy to imagine this as a song George recorded with the Band at Big Pink. “Almost 12 Bar Honky Tonk” is just what the title suggests, a blues instrumental with blues-wailing guitars and honky-tonk piano. The track is eight and half minutes long.

The two Dylan songs on the album are represented by fascinating outtakes that show how the tracks could have ended up. Take 2 of “If Not For You” is taken at a faster pace than the master and has a Hammond B/Leslie rotating speaker sound throughout, while Take 5 of “I’d Have You Anytime” has what Paul Hicks describes as “that really Spector-y reverb piano.” Harrison also recorded a bit of the Beatles “Get Back,” although it comes across as more of a brief jam than a serious attempt to record the song.

Towards the end of the sessions, Harrison recorded a five-minute slide-guitar dominated version of “Woman Don’t You Cry For Me.” The disc contains Take 5, which indicates that the song was given consideration for inclusion on the album. Harrison would later re-record the song for his 33 1/3 LP.

The most ironic of the outtakes is the old barbershop quartet song from 1929, “Wedding Bells (Are Breaking Up That Old Gang Of Mine).” George would have been familiar with Gene Vincent’s recording of the song and may very well have been thinking how the marriages of John & Yoko and Paul & Linda had contributed to the breakup of the old gang known as the Beatles. Paul would later play a bit of the song for The Beatles Anthology video as a commentary on how the Beatles had grown apart in the time leading up to their breakup.

The 50th Anniversary 5 CD/Blu-ray edition comes in a sturdy box measuring slightly over 7″ x 7″ with a thickness of about an inch. The booklet contains some nice pictures and images of hand-written lyrics and tape boxes. The song-by-song notes are informative, with some information that will be new to even the most die-hard fans and scholars.

All Things Must Pass is an album that truly deserves deluxe treatment for its 50th Anniversary. Fortunately those involved lived up to the task. Even if you have mixed feelings about the 2020 Stereo Mixes, the 5 CD/Blu-ray edition is well worth buying, particularly if you do not own the bootlegs of the studio demos. As per George Harrison’s wishes, this box set liberates the songs from their big production and shows what a gifted songwriter George had become during his last few years with the Beatles.