On Sunday, January 13, 1963, the Beatles were at Alpha Television to tape an appearance for the television program Thank Your Lucky Stars. The show was popular with Britain’s teenagers and was carried by many stations throughout the U.K. The Beatles mimed performance of Please Please Me was broadcast on Saturday, January 19, 1963, a week after the single’s release. The national exposure generated by the show helped push the record up the charts.

This important television appearance was arranged by a new contact made by Brian Epstein, music publisher Dick James. When the Beatles first single, Love Me Do, failed to receive the promotion expected by Brian, he expressed his displeasure with the song’s publisher, Ardmore & Beechwood Ltd., to George Martin. The Beatles producer agreed to help Brian find a new publisher for the Beatles next release.

One of Martin’s recommendations was Dick James, a singer whom Martin had produced in the mid-fifties. Although James was struggling as a music publisher, his former career had left him with great contacts in the entertainment industry. When Brian brought him an acetate of the soon-to-be-released Please Please Me single, James responded favorably to the song. He impressed Brian with his enthusiasm and sewed up the publishing for the single by quickly lining up an important television appearance for the Beatles with one phone call to his friend Philip Jones, the producer of Thank Your Lucky Stars. This would soon lead to a publishing arrangement that would make James a fortune.

On Monday, January 14, the Beatles played the Civic Hall in Ellesmere Port, 19 miles south of Liverpool. On Wednesday, the group traveled to Manchester for two promotional bookings. After an afternoon of rehearsals for both events, the Beatles appeared live on the 6:35 p.m. Granada Television show People And Places, miming both sides of their new single, Please Please Me and Ask Me Why. Then it was off to the Playhouse Theatre to record four songs for future broadcast on January 25 on the BBC radio program Here We Go. In addition to the new single, the group also recorded Chains and Three Cool Cats, although the latter song was not included in the show. Thursday, January 17, was a performance double header, with a lunchtime show at the Cavern and a sold out evening concert at the Majestic Ballroom in Birkenhead. Please Please Me made its chart debut in the January 17, 1963 issue of Record Retailer.

The weekend schedule was typical of the time. On Friday, the group played the Floral Hall Ballroom in Morecambe. On Saturday, January 19, the Beatles were watched by a large young TV audience on Thank Your Lucky Stars and could later be seen in concert at the Town Hall Ballroom in Dodington, Whitchurch, Shropshire. On Sunday, the Beatles played an evening show at the Cavern.

Meanwhile, in America, Vee-Jay Records was preparing Please Please Me and Ask Me Why for single release. As evidenced by the packing slip shown below, Universal Recording Corp. in Chicago shipped two acetates of the songs to Audio Matrix in New York for manufacture of the metal parts used to press the single. This packing slip is the oldest known surviving piece of American Beatles memorabilia. Today’s trivia questions deal with the early days of the Beatles music publishing.

Brian Epstein fancied John and Paul’s songs being published by the American publishing company Hill & Range because the company controlled the music catalog of Elvis Presley. Brian was impressed with the promotion of Elvis and believed his boys would one day be bigger than Elvis. George Martin advised Brian against placing the publishing with a large company, believing that the Beatles would be better off with a small publisher that would work hard for the group.

Dick James’ single of the theme for the British TV show Robin Hood became a number 14 hit in 1956 on the Parlophone label. James association with the record’s producer, George Martin, would later lead to him obtaining the music publishing for most of the Beatles catalog. 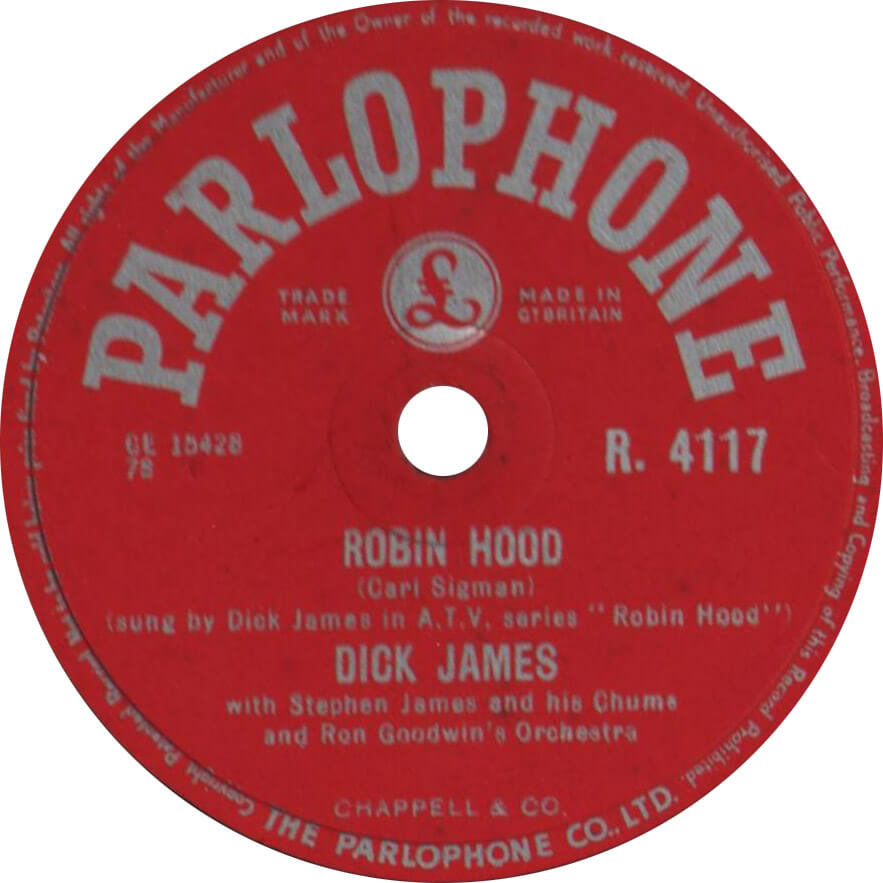