50 Years Ago: Beatles in Scotland

The Beatles began 1963 with a tour of Scotland that ran from January 2 through January 6, although the first date was cancelled due to a snow storm. On Tuesday, January 8, the group was at Scottish Television in Glasgow to lip-sync their soon-to-be-released single, Please Please Me, for the children’s television program Roundup. The performance was broadcast in Glasgow later that afternoon on the 5:00 pm show.

On Thursday, January 10, the group was back in Liverpool, headlining a five-act concert at Grafton Rooms. The next day was a particularly busy day for the boys. After completing their lunchtime concert at the Cavern, the band headed south to Old Hill, Staffordshire, for an early evening show at the Plaza Ballroom. They were scheduled to play a late evening concert at the Ritz Ballroom in Birmingham, Warwickshire, but it had to be postponed due to bad weather and poor road conditions. On Saturday, they ventured further south to Kent, to play an evening show at the Invicta Ballroom in Chatham.

But the highlight of the week was the release of group’s second single, Please Please Me, which was issued on January 11, 1963. Anticipation was high, as George Martin had told the group that he expected the song to reach number one on the charts. The previous week, Mersey Beat ran an article on the recording of the single in which Alan Smith raved about the song and talked of its “solid, insistent beat, defying you not to get up and dance.” He said he wouldn’t be surprised if the single jumped right into the Top Ten.

Other publications predicted success for the disc. Record Retailer reviewed the single in its January 10, 1963, issue, stating that the group was “destined to be regular chart entries” and that their second record “has chart written all over it and seems sure to do well.” The January 12 New Record Mirror described Please Please Me as a “high-pitched number with plenty of guts, and good tune, vocalizing and some off-beat sounds.” The magazine also praised the flip side and called the single a “good all-around disc — one worth buying” with sounds “that other British groups can’t reproduce.” In NME, Keith Fordyce wrote, “This vocal and instrumental quartet has turned out a really enjoyable platter, full of beat, vigour and vitality–and what’s more, it’s different. I can’t think of any other group currently recording in this style.”

Despite growing enthusiasm for the Beatles in the U.K., Capitol Records in the United States once again decided against releasing the group’s latest single. An alternative arrangement was found for the Beatles when Vee-Jay Records, Inc. entered into a licensing agreement with Transglobal Music Co., Inc. on January 10, 1963, for the rights to manufacture, advertise and sell in the United States the songs Please Please Me and Ask Me Why. The significance of this agreement will be discussed in future columns.

Meanwhile, back in the U.K., fans who paid attention to songwriting credits noticed a change from the group’s first single, with both songs being credited to “McCartney – Lennon” rather than “Lennon – McCartney.” Today’s trivia questions deal with the songwriters credits.

George Martin wrote the label copy for the Beatles records in 1962 and 1963. For reasons unknown, he listed the songwriters credits as “McCartney – Lennon” for the group’s second single and continued the practice until instructed by John to go back to “Lennon – McCartney.”

In the U.K., the “McCartney – Lennon” songwriters credits appear on both sides of the group’s second and third singles, Please Please Me c/w Ask Me Why and From Me To You c/w Thank You Girl, as well as on the original songs appearing on the Please Please Me album, including Love Me Do and P.S. I Love You, which were both credited to “Lennon – McCartney” on the group’s first single. 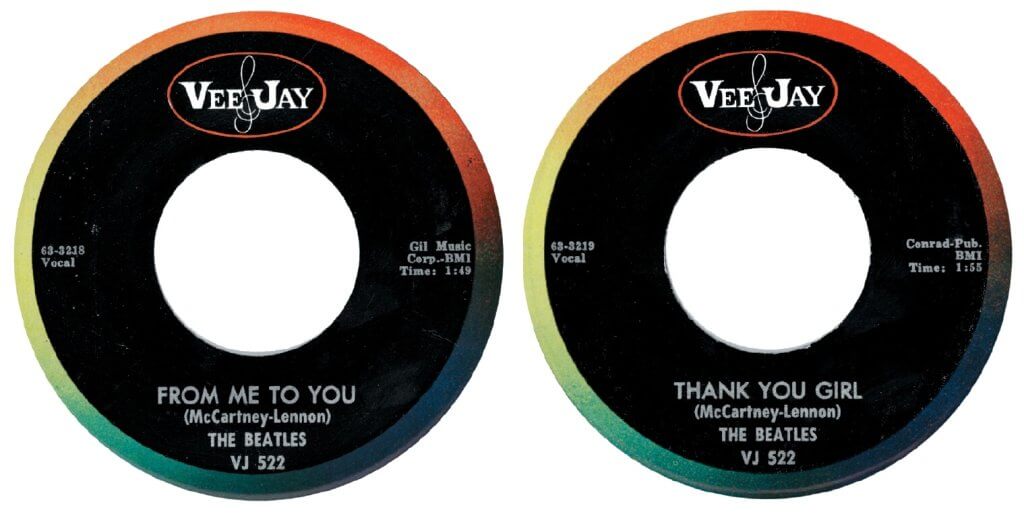 In case you are wondering, the Capitol LP The Early Beatles, which contains several songs from the Please Please Me album, has “John Lennon – Paul McCartney” credits.