On December 2, 1962, the Beatles passed on their usual Cavern Club Sunday night show to appear on a multi-artist bill at the Embassy Cinema in Peterborough, Northants. Although the Beatles had a new record out and were creating a buzz in the north of England, they were not the headline act. Most in the audience were there to see a pop singer who, at the time, had twice topped the charts with singles issued on EMI’s Columbia label. Neither the audience nor the critics were impressed by the four young lads from Liverpool, as evidenced by the brutal review written by Lyndon Whittaker.

Whittaker began by saying that “The Exciting Beatles” failed to excite him. He was particularly hard on poor Ringo, commenting that “The drummer apparently thought that his job was to lead, not to provide rhythm” and that he “made far too much noise.” Whittaker was obviously not a fan of rock ’n’ roll or loud music. He stated that Twist And Shout “sounded as though everyone was trying to make more noise than the others.” He thought that the mellow show tune A Taste Of Honey was much better and that their single Love Me Do was “tolerable.”

Although the poor reception at this Sunday concert appearance was quite sobering for the Beatles, the following week was a return to the now familiar grind of uplifting television and club appearances. On Monday, December 3, the group mined Love Me Do for the ITV show Discs A Gogo, which was broadcast regionally from Bristol, Somerset. The following day they made their London television debut on the ITV show Tuesday Rendezvous, this time lip syncing Love Me Do and part of P.S. I Love You.

On Wednesday, the group played both lunchtime and evening shows at the Cavern. The next night they played at Club Django, a jazz venue in Southport, Lancashire. On Friday, the Beatles played a lunchtime show at the Cavern and headlined a seven-act bill at the Tower Ballroom in New Brighton, Wallasey. After a Saturday appearance at the Oasis Club in Manchester, the Beatles returned to the friendly confines of the Cavern for their usual Sunday night gig. By then, the previous Sunday night failure at the Embassy Cinema was long forgotten.

Today’s trivia questions deal with the pop singer who upstaged the Beatles at the Embassy Cinema.

1. Who was the pop singer who upstaged the Beatles on a multi-artist bill at the Embassy Cinema on December 2, 1962?

2. What song recorded by the artist referred to above was performed by the Beatles and is on the Live! At The Star-Club LP?

3. What were the two songs recorded by the artist referred to above that topped the U.K. charts in 1962? 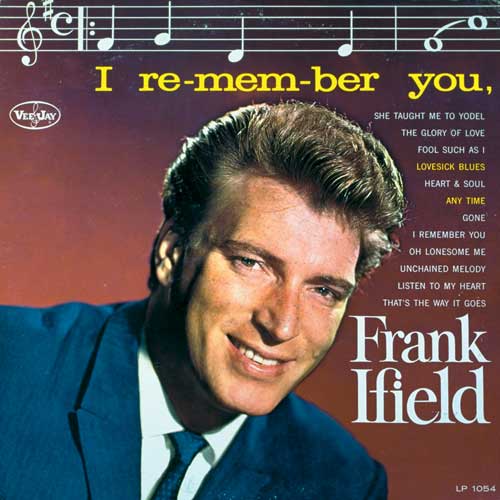 Frank Ifield headlined a December 2, 1962, concert at the Embassy Cinema in Peterborough, Northants, during which he upstaged the Beatles. Ifield performed his number one hit I’ll Remember You, which became part of the Beatles extended set list and appears on the Live! At The Star-Club LP recorded later that month during the Beatles final club appearance in Hamburg, Germany. Ifield’s two number one U.K. hits from 1962 were I’ll Remember You and Lovesick Blues. He would have two more U.K. chart toppers in 1963. 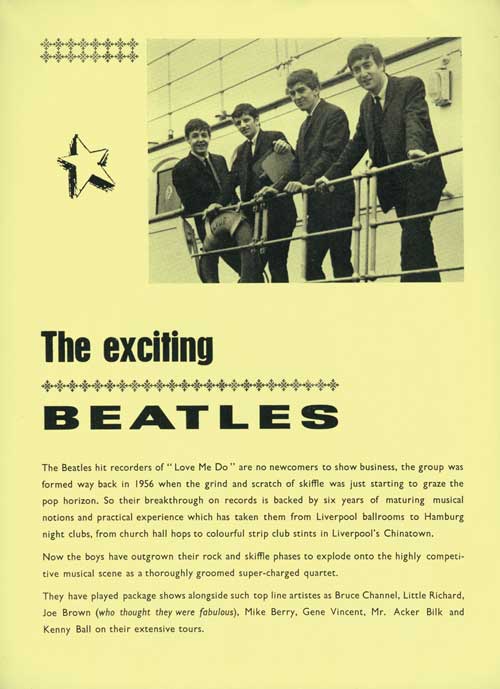 The program from the Frank Ifield concert of December 2, 1962. The Beatles were one of the featured acts. A page inside had one of the first publicity shots taken of the group after Ringo joined.