50 Years Ago: Touring with Orbison and their own Radioshow

The Beatles began the week of May 20, 1963, on tour with Roy Orbison, with a Monday night concert at the Gaumont Cinema in Southampton, Hampshire. On their day off from the tour on Tuesday, the group was at the Playhouse Theatre in London to record two shows for BBC radio. Between 5:30 and 6:30 pm, they took part in the taping for the May 25,1963 edition of Saturday Club. The group talked with host Brian Matthew and played six songs: I Saw Her Standing There, Do You Want To Know A Secret, Boys, Long Tall Sally, From Me To You and Money. The first three songs were from the group’s debut album. Two of the last three songs had yet to be recorded by the Beatles at Abbey Road, but would be at a later time. Money would be the closing track on the group’s second album and Long Tall Sally would be title track to a 1964 EP. After a 45 minute dinner break, the Beatles rehearsed and later recorded six songs for Steppin’ Out, which was taped before a live audience and broadcast on June 3, 1963. The songs were: Please Please Me, I Saw Her Standing There, Roll Over Beethoven, Twist And Shout, Thank You Girl and From Me To You. (Twist And Shout was not broadcast.)

On Wednesday, it was back on the road again with the Orbison Tour for an evening show at the Gaumont Cinema in Ipswich, Suffolk. The next evening the tour played the Odeon Cinema in Nottingham, Notts.

The weekend began with the Beatles back to work for the BEEB, this time recording at Aeolian Hall’s Studio Two in London for their own BBC radio show titled Pop Goes The Beatles. The group recorded the instrumental theme for the show plus a half-dozen songs: From Me To You, Everybody’s Trying To Be My Baby, Do You Want To Know A Secret, You Really Got A Hold On Me, Misery and The Hippy Hippy Shake. Two of the three yet-to-be-recorded songs ended up on future albums (Everybody’s Trying To Be My Baby on Beatles For Sale and You Really Got A Hold On Me on With The Beatles). The Hippy Hippy Shake was not recorded for EMI. The Pop Goes The Beatles radio show made its debut on June 4. And as if that wasn’t enough work for the day, the Beatles played two concerts that evening at the Granada Cinema in Walthamstow, London.

On Saturday, the Beatles and the tour played the City Hall in Sheffield. On Sunday, the Beatles played Liverpool for the first time in over six weeks, with a tour appearance at the Empire Theatre.

Today’s trivia questions are about the Beatles, Roy Orbison and BBC radio. 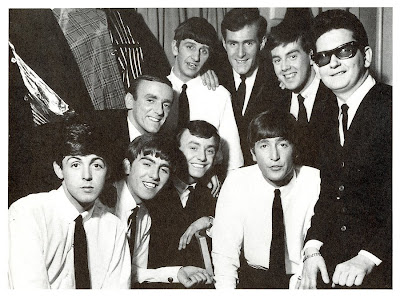