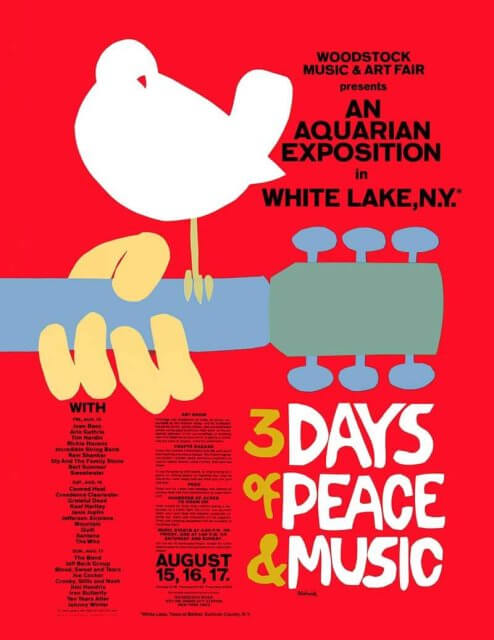 While the Beatles were putting finishing touches on their Abbey Road album, an ambitious music festival was scheduled to take place on a dairy farm in Bethel, NY, the weekend of August 15-17, 1969. The Woodstock Music & Art Fair was billed as “An Aquarian Exposition—3 Days of Peace and Music.” It was inspired by the 1967 Monterey Pop Festival. The festival was the brainchild of businessmen John Roberts and Joel Rosenman, musician and music producer Artie Kornfeld and concert promoter Michael Lang. The group formed Woodstock Ventures early in 1969 and set about booking a roster of performers and finding a site for the event. The town of Woodstock didn’t have a suitable venue, Saugerties and White Lake didn’t work out and Wallkill banned the festival. With time running out, Woodstock Ventures made a deal with Max Yasgur for the use of his farm as the festival site, telling Bethel officials they were expecting no more than about 50,000 attendees, though they actually expected 200,000.

The promoters began running radio ads early in the summer, with tickets priced at $18 for the three days in advance and $24 at the gate. But, by the Monday before the festival, the gates and the fencing around them were nowhere close to being completed. By Wednesday, thousands had already arrived at Yasgur’s farm, including many who didn’t have tickets. By Friday, the promoters had no choice but to declare Woodstock “a free festival.” With an estimated turnout of 400,000, there were massive traffic jams on all the thoroughfares leading to Bethel. Sullivan County declared a state of emergency and New York Gov. Nelson Rockefeller nearly sent National Guard troops to the festival site on Sunday. Heavy thunderstorms turned the site into a giant quagmire and facilities were at a premium.

By all rights, Woodstock should have been a disaster, but despite all the lack of planning by the promoters and all the hardships for attendees and performers alike, somehow the festival really ended up being “3 Days of Peace and Music,” as Yasgur noted when he spoke to the throng assembled on his farm. There were relatively few drug casualties, a couple of births and two documented deaths. As for the music, what most people recall came from the 3-LP set and Michael Wadleigh’s documentary film of the festival, both of which were released the following year. The Woodstock memories that endure include the performances by the Who, Ten Years After, Joe Cocker, Sly and the Family Stone, Santana (prior to the release of their debut album), Arlo Guthrie and Richie Havens (“Freedom”), and, of course, Jimi Hendrix’s Monday morning festival finale.

There were a number of major acts of the day who did not play Woodstock or pulled out in the weeks prior to the festival.  The Beatles neither played the event nor had any of its members attend. Promoter Michael Lang wanted the Beatles, but realized that the group would have overpowered the bill and that they had stopped touring. As John was a big influence on Lang, he reached out to John through Apple’s Chris O’Dell, who was friends with an acquaintance of Lang. Ms. O’Dell sent a memo about the concert to John & Yoko, who at the time were frequently at Apple. John told Chris that he was not interested in playing, but would like to go see it. But, alas, it was not to be. In May, John was barred from entering the U.S. due to his 1968 arrest in London for possession of marijuana. And, as it turned out, during the dates the mid-August 1969 festival took place, the Beatles were rushing to  finishing their latest LP, Abbey Road.

In a letter to Lang dated July 7, 1969, Ms. O’Dell indicated that Apple wanted to present at Woodstock: (A) The Plastic Ono Band; (B) Billy Preston; and (C) James Taylor. Apple also wanted a booth to promote Apple projects—past, present and future—and show a color film by Mr. & Mrs. John Lennon. As for the Plastic Ono Band, this would be a “series of plastic cylinders incorporated around a stereo sound system” (as depicted on the “Give Peace A Chance” picture sleeve). The July 12 NME reported that John and Yoko were considering attending Woodstock if the U.S. Embassy granted an entry visa to John. There was also talk of John and Yoko fronting an American-assembled group. Apparently no follow-up took place and Apple had no presence at Woodstock.

The muddy festival wound up being unduplicated, although people have tried many times. There was something about it that simply could not be repeated.

The above stories excerpted from chapters in the upcoming book, The Beatles Get Back to Abbey Road.