50 Years Ago: “SHE LOVES YOU” RELEASED IN AMERICA WHILE BEATLES ON VACATION 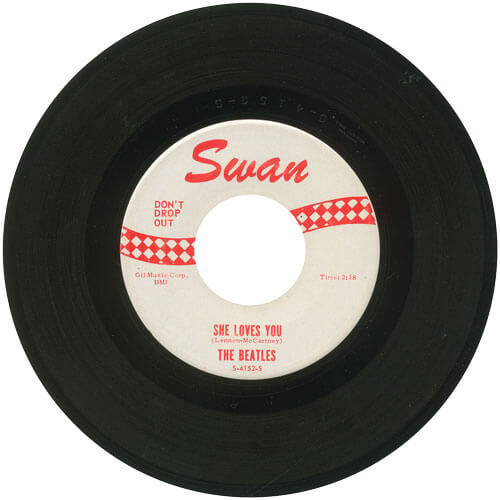 On September 16, 1963, the Beatles were finally given a break in their schedule, allowing the members of the group to have some vacation time. As they headed off on holiday, their latest single, She Loves You, was finally getting its American release. The disc was issued by Swan Records, a small independent label out of Philadelphia, on or about September 16, 1963. The record ended up on Swan after a series of events that would seem quite strange knowing what we know now.

Although Vee-Jay’s licensing agreement with EMI’s Transglobal subsidiary gave the company a right of first refusal for all Beatles masters through January 9, 1968, EMI unilaterally terminated the agreement after Vee-Jay failed to account for or send royalties on the sales of the Please Please Me and From Me To You singles. The amount owed on the two discs was later determined to be $859. Next, Capitol Records, which was owned by EMI, was given the option to release She Loves You. Incredibly, the label decided to pass on the record. After a few other major labels also turned down the opportunity to issue the Beatles latest U.K. chart-topping single, a licensing agreement was reached with Swan.

The She Loves You single on Swan went virtually unnoticed upon its initial release. Philadelphia radio station WIBG may have given the disc a few courtesy spins, listing the single at number 81 in its September 23, 1963 survey. It would be nearly two months before the record charted again in a local American market and two more months before the single reached the national charts (by which time the single had been reissued in an attractive picture sleeve).

Today’s questions cover the Beatles on holiday and the initial release of She Loves You on Swan.