50 Years Ago: I WANT TO HOLD YOUR HAND MAKES U.S. RADIO DEBUT

WHILE BEATLES RECORD FOR THE BBC,

I WANT TO HOLD YOUR HAND MAKES U.S. RADIO DEBUT 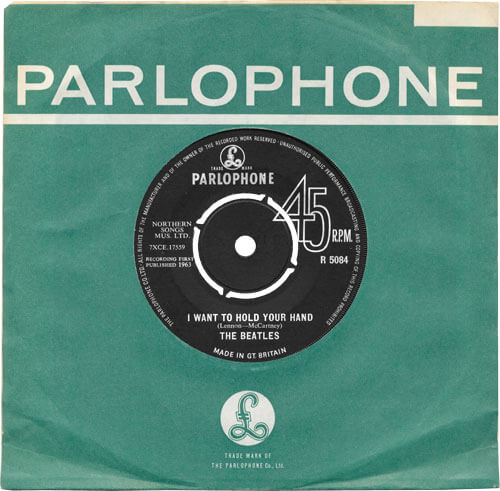 After a rare day off on Monday, December 16, 1963, it was back to work for the Beatles on Tuesday. The group spent the afternoon at the Playhouse Theatre in London recording songs for the Christmas edition of the BBC radio program Saturday Club. They performed the following six songs: the A-sides of their most recent hit singles, I Want To Hold Your Hand and She Loves You; the B-side to the current single, This Boy; two Paul lead vocals from their current hit LP, All My Loving and Till There Was You; and George given his turn on the current album track Roll Over Beethoven. They also briefly sang a parody of Dora Bryan’s All I Want For Christmas Is A Beatle (during which they changed the lyrics to All I Want For Christmas Is A Bottle) and a vocal medley of five of their songs and a Christmas classic. This so-called Chrimble Mudley lasted a mere 29-seconds, but was both humorous and impressive in its content. The show was broadcast on Saturday morning, December 21.

The next day the Beatles were back at work for the BBC, this time at its Paris Studio in London to record a special two-hour show for broadcast on Boxing Day (December 26), which was also a bank holiday. The group would record four more such specials for bank holidays. The Beatles performed five of the six songs recorded the day before for Saturday Club (all but This Boy) plus Boys, Money and I Saw Her Standing There. Although it was the Beatles show, it was hosted by Australian singer Rolf Harris and featured other recording artists.

That weekend, the Beatles headlined two concerts featuring the same acts that would take part in The Beatles Christmas Show, set to debut at the Astoria Cinema in London on Christmas Eve. The Saturday show was at the Gaumont Cinema in Bedford, while the Sunday performance was at the Empire Theatre in Liverpool.

Meanwhile across the Pond, December 17, 1963, marked another important event that helped jumpstart Beatlemania in America. Last week’s 50th anniversary post discussed the importance of Walter Cronkite broadcasting a five-minute story on the Beatles at the end of the CBS Evening News on December 10. After viewing the Beatles story that evening, Marsha Albert, a 15-year-old girl living in Silver Spring, Maryland, wrote a letter to her favorite radio station, WWDC, referencing the news story and asking “Why can’t we have this music in America?” In response to her letter, WWDC disc jockey Carroll James contacted a friend of his who was a stewardess for B.O.A.C. and asked her to bring him the Beatles latest single.

After receiving the disc, James invited Marsha down to the station to introduce the song I Want To Hold Your Hand to America on The Carroll James Show. Listener response was overwhelming favorable, so WWDC put the song in heavy rotation. James sent a dub of the song to DJs in Chicago and St. Louis, and all of a sudden, Capitol was getting demand in three major markets for a single the company had scheduled for January 13, 1964 release. This caused Capitol to rush release the single out on December 26. The impact of that decision will be told in next week’s 50th anniversary post.