The Beatles spent the week of March 9, 1964, being filmed for their first movie. Monday’s schedule involved finishing the shooting for the scenes on the train. The next day Ringo’s pub scene was shot, during which he orders a sandwich and plays darts with a humorous and near fatal result. On Wednesday, the group made their first trip to a London film studio where several of the movie’s interior scenes would be shot. The Beatles were filmed in a set resembling a baggage car on a train playing cards and performing the song I Should Have Known Better. This scene would be edited into the previously shot train sequences. The following day the Beatles returned to the film studio to shoot their hotel room scenes, which included the group being ordered by their road managers to answer their fan mail and a scene of the group returning from a night out and finding a hotel waiter (minus his uniform) in the room’s closet. The final day of filming for the week took place at Gatwick Airport. The group was filmed entering a helicopter. This would be the final scene in the film where promotional photographs would fall from the helicopter as ascended into the sky. After lunch, the group was filmed from a hovering helicopter running about a helicopter launch pad. This would be incorporated into the scene of the Beatles rollicking about a playground with Can’t Buy Me Love serving as the musical soundtrack.

While the Beatles were off shooting their film, George Martin and the Abbey Road engineers continued with the mixing of the songs recorded by the Beatles before filming began.

During the week EMI and Capitol were pressing copies of the Beatles next single, Can’t Buy Me Love b/w You Can’t Do That, and having the records sent to distribution centers for the single’s upcoming release. EMI had advance orders of 850,000 the week before the disc’s release. Capitol was anticipating orders of 1,700,000 copies.

Beatles records continued to dominate U.S. sales and charts. Capitol’s Meet The Beatles! was still atop the album charts, with Vee-Jay’s Introducing The Beatles at number two. I Want To Hold Your Hand was at number one on the singles chart, with She Loves You at number two and Please Please Me at three. The Beatles incredibly held down not only the top two positions on the album charts, but also the top three on the singles charts. The group’s domination of the American charts would become even greater a few weeks later.

This week’s questions pertain to the Beatles during the second week of March 1964.

1. The Beatles first movie was filmed at Twickenham Film Studios, which is located in London.

2. In addition to A Hard Day’s Night, the Beatles films Help! and Let It Be were filmed at Twickenham Film Studios.

3. Promotional videos for We Can Work It Out, Day Tripper, Help!, Ticket To Ride, I Feel Fine, Hey Jude and Revolution were filmed at Twickenham Film Studios.

4. Norm and Shake were the names of the Beatles road managers in the film that insisted that the group answer all of their fan mail.

5. In A Hard Day’s Night, Ringo is the Beatles that gets the most fan mail. 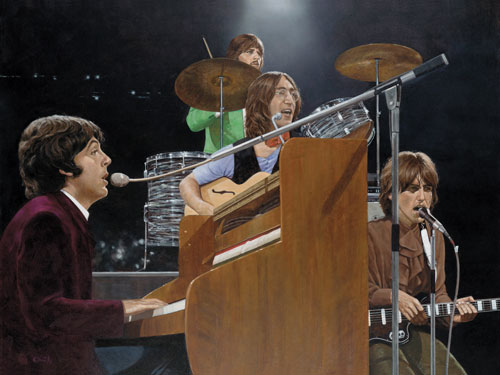 The above painting by Eric Cash (copyright 2008) captures the excitement of the Beatles performing Hey Jude before an audience at Twickenham Film Studios on September 4, 1968. A promotional clip of the group’s performance aired in the U.K. on Frost On Sunday, and in the U.S. on The Smothers Brothers Comedy Hour.