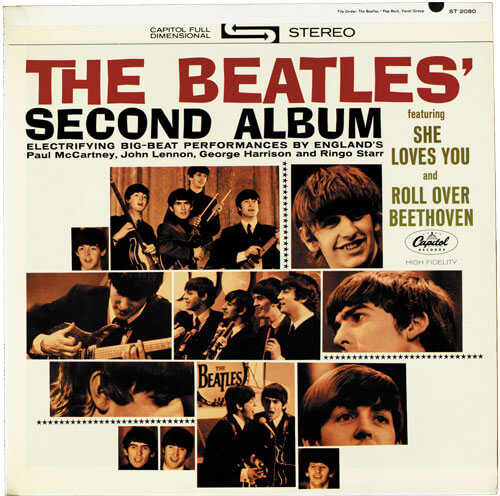 Filming of the Beatles first movie was completed during the week of April 20 – 24, 1964. The first two days of the final week were spent filming a solo sequence for one of the Beatles that would not make the final edit of the film. On Wednesday, April 22, the Beatles were filmed running down a fire escape behind the Hammersmith Odeon cinema in London. This sequence was used for the start of the group’s escape from their day full of rehearsals leading to them running around a field. That afternoon additional police chase footage was shot, followed by more scenes of Ringo on his afternoon of parading.

On April 23, additional footage was shot for the scene of the Beatles running and jumping on a helicopter pad. Rather than bring the boys back to a real concrete pad, the crew prepared a pad designed to match the one previously filmed. At the end of the sequence the Beatles are admonished by the groundskeeper, who says “I suppose you know this is private property,” to which one of the boys replies, “Sorry we hurt your filed, mister.” Filming was completed the following day with a scene in which Ringo tries to be a true gentleman for a lady, but unfortunately causes trouble for her which leads to his arrest.

In the United States, Capitol’s second Beatles album, cleverly titled The Beatles’ Second Album to trivialize Vee-Jay’s Introducing The Beatles, debuted on the Billboard album chart at number 16 in the magazine’s April 25 issue. The album was a Capitol concoction consisting of five leftover R&B covers from With The Beatles mixed with three B-sides, She Loves You and two previously unreleased songs later slated for a British EP. And while this may sound like a recipe for disaster, the album works spectacularly well. In fact, many of the people who crucify Capitol for its treatment of the Beatles catalog begrudgingly admit or glowingly rave that the LP is a rock ’n’ roll classic. With songs like She Loves You, You Can’t Do That, Thank You Girl, I’ll Get You, Roll Over Beethoven, Long Tall Sally, Money, Please Mr. Postman, etc., you know that can’t be bad. The following week the album replaced Meet The Beatles! at the top of the charts, where it remained for five straight weeks.