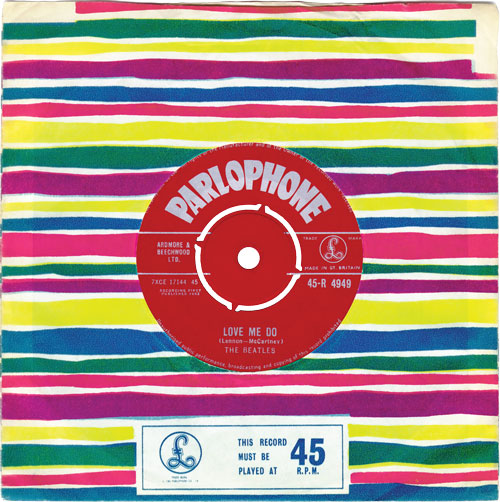 Next Friday, October 5th, 2012, will be an important day for faithful followers of THE BEATLES. Fifty years ago, on October 5, 1962, EMI released the Beatles first single, Love Me Do c/w P.S. I Love You. A review in the October 4 British trade magazine Record Retailer noted the single’s sales potential in a brief review: “A new group from the Liverpool area. Their first record but they already have a strong following and this seems to be the strongest outsider of the week.” The Beatles would not remain “outsiders” for long.

Love Me Do entered the Britain’s Top 50 chart published by Record Retailer at number 49 on October 11, 1962, eventually peaking at number 17, first on December 27, 1962, and then on January 10, 1963. Other British magazines charted the single, with Melody Maker reporting the disc at number 21, New Musical Express at 27, Disc Weekly at 24 and New Record Mirror at 17. The latter publication reviewed the single in its October 13 issue, noting the group’s peculiar name and commenting on the song’s unusual vocal combinations. The reviewer thought the song dragged in the middle and characterized the B-side as poorly arranged.

Not surprisingly, the group’s debut disc was met with more enthusiasm in Liverpool, where the city’s largest evening newspaper, The Liverpool Echo, ran the following review under the headline BIG DATE FOR THE BEATLES:

“Next Friday, October 5th, will be an important day for that talented Liverpool group THE BEATLES and thousands of young Merseysiders who have become their faithful followers. Parlophone will be issuing the quartet’s debut single on that day.

“On the A side lead vocalists John Lennon and Paul McCartney chant out their self-written lyrics of ‘Love Me Do’, an infectious medium-paced ballad with an exceptionally haunting harmonica accompaniment which smacks home the simple tune and gives the whole deck that extra slab of impact and atmosphere so essential to the construction of a Top Twenty smasher.

“There’s nothing startlingly distinguished about the simple, repetitive lyrics but a disc like ‘Love Me Do’ relies more upon punchy, ear-catching presentation and on this score The Beatles come out with flying colours.

“Flip ‘Love Me Do’ to hear another, slightly faster Lennon/McCartney number entitled ‘P.S. I Love You’. This bright ditty has a tingling Latin taste to it.

“There’s a refreshing do-it-yourself approach to this single by The Beatles. They have written their own material and provided their own vocal performance. I wish these four go-ahead young men the very best of good fortune with their initial Parlophone release.”

The above review appeared in the newspaper’s Off The Record column by Disker, a pen name used by Tony Barrow, who would soon by hired by Beatles manager Brian Epstein to serve as press and publicity officer for Epstein’s NEMS Enterprises.

Liverpool’s music newspaper, Mersey Beat, charted Love Me Do at number one in its October 18, 1962, issue. Although a writer described the song as “rather monotonous,” he recognized it was “the type of number which grows on you,” stating that while he was disappointed when he first heard it, he enjoyed it more and more with each play. Reviews of later Beatles releases often contained similar expressions of initial disappointment replaced by admiration after repeated listens. This was due in part to the higher and higher expectations for each new record issued by the group.

Despite respectable chart action, EMI was disappointed with the initial sales of the single, which stood at about 17,000 units by the end of 1962. After the group’s popularity spread beyond Liverpool with each successive release, Love Me Do sold an additional 100,000 units before its deletion from the EMI catalog in the mid-sixties.

The above ad appeared in issue No. 6 of Pop Weekly magazine (cover dated October 6, 1962).

To mark the 50th anniversary of the release of Love Me Do, EMI is issuing a limited edition red label vinyl pressing of the single packaged in the same “beach towel” sleeve that the disc originally appeared in. The record is easily distinguishable from the original single as it has a solid center with a small center hole. It is sure to sell out quickly and become a collector’s item. The record is currently available from the website for The Fest for Beatles Fans.

Today’s trivia question covers other songs that were popular in Great Britain at the time Love Me Do was released.

The Beatles single was number one on the Merseyside Tops chart published by Mersey Beat magazine in its October 18, 1962, issue. Name the songs occupying the next four spots of the chart.

In honor of the 50th anniversary of the release of the Beatles first single on Parlophone, the book BEATLES FOR SALE ON PARLOPHONE RECORDS is on sale for $50 for the entire month of October. In addition, clearance copies of the book, which have scuffed covers but perfect interior pages, are available for just $30. If you’ve put off buying the Parlophone book or want a second “reading” copy, now is the perfect time to buy the book. You’ll learn the stories behind not only the Beatles first record, but also all of the records released in the U.K. from 1962 – 1970. 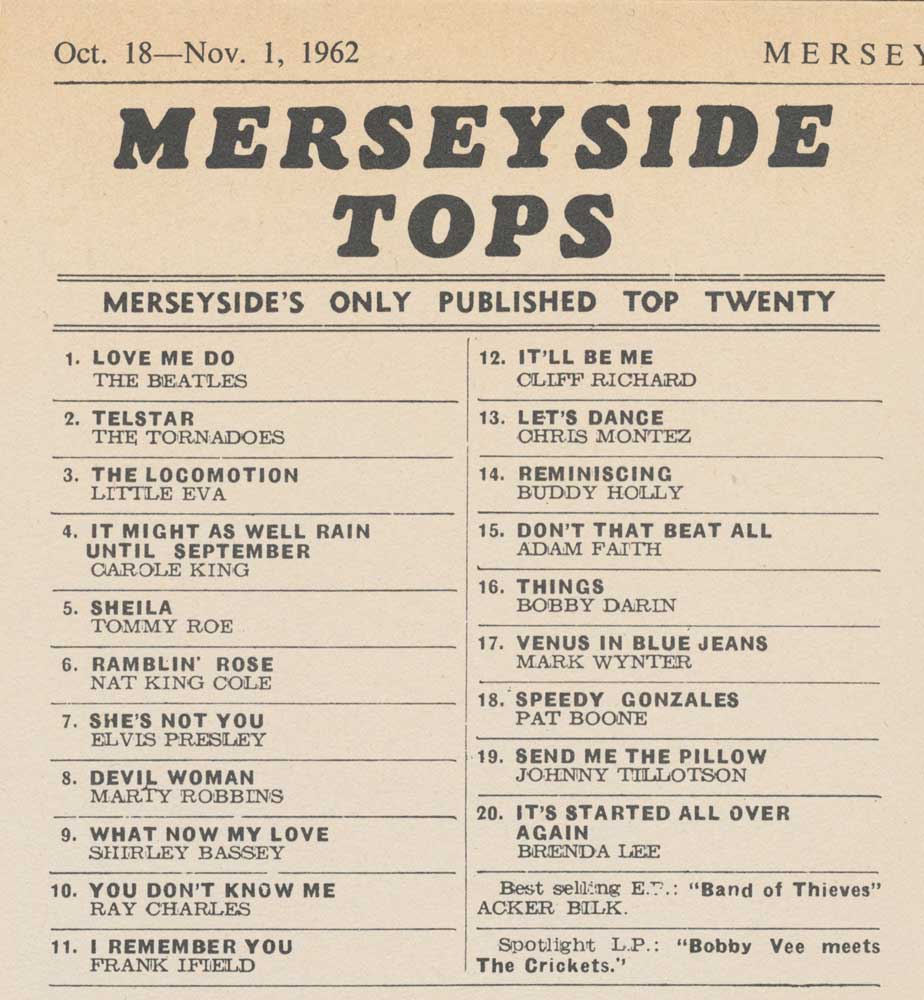