The Beatles began the week of February 3, 1964, finishing off their three-week engagement at the Olympia Theatre in Paris, France. The final two show performances were held on Monday and Tuesday. After returning to the U.K. on Wednesday, the Beatles prepared for their first visit to America.

On Friday, February 7, 1964, Pan American Airways Flight 101 lifted off the runway at London Airport at 11:00 a.m. and headed across the Atlantic Ocean for New York. On Board the Boeing 707 jetliner were the Beatles and their entourage. When the Beatles exited the plane at Kennedy International Airport shortly after 1:20 p.m. (shown above), they were greeted by over 3,000 teenagers who had cut school and assembled on the airport’s upper arcade to welcome their heroes.

The full story is told in great detail in the book The Beatles Are Coming! The Birth of Beatlemania in America. Here are the highlights of the group’s first weekend in America.

After quickly clearing customs, the Beatles gave their first press conference before the tough-minded New York press. It was a chaotic scene during which the Beatles charmed most of those present. They were then taken by a fleet of limos to the Plaza Hotel on Central Park, where they were once again greeted by screaming fans. The group checked into their rooms and later gathered together to watch themselves on the CBS Evening News with Walter Cronkite. They then took part in a telephone interview by Brian Matthew, host of the BBC radio show Saturday Club. The Beatles were visited and interviewed that evening by popular New York disc jockey Murray the K, who brought along the black female singing group Ronettes to ensure he would be welcome. The group discussed going out to sample the New York nightlife, but ultimately decided they were too tired and instead watched TV and listened to the radio.

On Saturday, George was examined by the resident physician at the Plaza Hotel. After requesting an autographed picture of the group, Dr. Jules Gordon determined that George had a strep throat and a fever of 104 degrees. George was ordered to stay in bed and was cared for by his sister, Lou.

While George got some needed rest, the other Beatles went to Central Park for a photo session before heading over to CBS Studio 50 for a rehearsal for The Ed Sullivan Show. The group went through camera blocking with two other people filling in for George. Sullivan, who normally did not attend Saturday rehearsals, was there and somewhat concerned until George showed up late in the afternoon.

After leaving Studio 50, the three healthy Beatles and Brian met with representatives of a California guitar company at the Savoy-Hilton. They later returned to the Plaza to present George with a new guitar. That evening, while George remained in bed and played his new guitar and called up local radio stations, the others and George Martin had dinner with Capitol Records executives at the exclusive 21 restaurant. When they returned to the Plaza, they joined George on the phone with Murray the K, who told listeners that the Beatles had taken over his program. Paul introduced Marvin Gaye’s Pride And Joy and Ringo taught Murray the K a new expression, “It’s the gear, baby.” And it was.

Sunday, February 9, 1964, was the day that the Beatles and all of America had been waiting for. The Beatles were going to be on Ed Sullivan, coast to coast with America’s favorite host. Exactly one year earlier, the Beatles had performed at the Empire Theatre in Sunder, Durham, England, as the sixth and bottom act of a tour headlined by sixteen-year-old Helen Shapiro. Oh my how things had changed. On this day they were headlining The Ed Sullivan Show.

The Beatles took part in a morning camera rehearsal. Afterwards, the group surprised the staff by asking to hear a tape playback of their performance. They explained to the sound crew that they did not want their vocals to overshadow their instrumental backing. They wanted both equally balanced.

The afternoon dress rehearsal, which was in front of a live audience, was total chaos, with screaming young girls and members of the press scurrying around to get pictures of the Beatles. After the rehearsal was completed, the group taped three songs, Twist And Shout, Please Please Me and I Want To Hold Your Hand, for future broadcast.

Finally, at 8:00 p.m. EST, it was time for the live broadcast of The Ed Sullivan Show. After Sullivan’s  introduction, the group opened with All My Loving as girls yelled and bounced in their seats. This was followed by Till There Was You, a slow love song from The Music Man that even adults could appreciate. The relative calm of the ballad was quickly shattered by a rocking rendition of She Loves You that provided a bold demonstration of the big beat sound. They returned later in the show to play both sides of their hit Capitol single I Saw Her Standing There and I Want To Hold Your Hand. The show was watched by a then record television audience of 73 million people.

Although the youth of America embraced the Beatles, some critics were quite harsh in their assessment. Jack Gould of The New York Times called televised Beatlemania “a fine mass placebo.” The New York Herald-Tribune proclaimed “Seventy-five percent publicity, twenty percent haircut and five percent lilting lament.” Even Sullivan Show musical director Roy Bloch failed to see what all the excitement was about, stating, “The only thing different is the hair, as far as I can see. I give them a year.” So much for predictions. Fifty years later, we’re still talking about the Beatles on The Ed Sullivan Show.

This week’s questions cover the Beatles first weekend in America.

2. Brian Sommerville. He was fired by Brian after the first U.S. visit.

4. A 12-string Rickenbacker electric guitar, which George would use on many of the songs on the group’s next album and first film, A Hard Day’s Night. 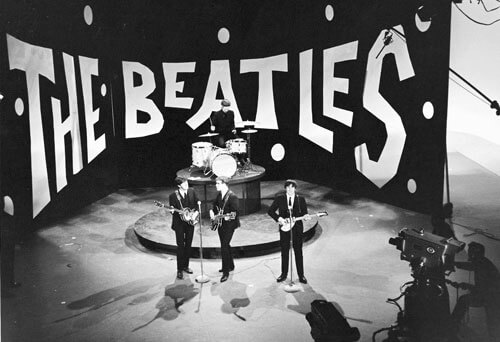