The Beatles spent the week of February 17, 1963, relaxing in Miami Beach. The group had been scheduled to return to England the day of their second appearance on The Ed Sullivan Show, but Brian decided to let the boys have additional time to enjoy sunny south Florida. On Monday, Sgt. Buddy Dresner arranged for the group to have use of a private home on Star Island. The Beatles were able to run on the beach and frolic in the waves. They also went water skiing for the first time. That evening, the group watched a science fiction television program with Sgt. Dresner, who taught the group a new word when describing an alien weapon seen in the show. John later incorporated the word into a song on The White Album.

On Tuesday, the group attended the workout of Cassius Clay (later known as Muhammad Ali), who was in training for his heavyweight championship fight with Sonny Liston. Sgt. Dresner also took the group to a drive-in theater to see a movie. George was the only Beatle to have previously seen a movie at a drive-in, having done so during his trip to America in September 1963.

The group also spent time during the week shopping, speedboating, swimming and snorkeling. Paul recalls a car dealership lending each Beatle his own MG to drive around. Ringo recalls being put behind the wheel of a speedboat and running it into the dock. After an exciting but grueling week in the frigid Northeast, the Beatles enjoyed a week of relaxation in sunny Florida. It was a happy and innocent time.

On Friday, February 21, the group made preparations for their return to England. The group flew in from Miami Beach to New York’s Kennedy Airport, where thousands of fans showed up on a cold winter evening to say goodbye to the Beatles. The scene at the airport was reminiscent of the frenzied reception that had greeted the group two weeks earlier.

The Beatles received a hero’s welcome at London Airport on Saturday morning. Their arrival was heavily covered by the British press, including print, radio, television and newsreel. On Sunday, February 23, it was back to work with the group their appearance on the British ABC Television program Big Night Out. The band mimed All My Loving, I Wanna Be Your Man, Till There Was You, Please Mister Postman, Money and I Want To Hold Your Hand.

Meanwhile, back in the States, Ed Sullivan described the Beatles as “a bunch of nice kids” during his opening remarks of his third consecutive show to have performances by the group. Although he gave the impression to his television audience that the group was appearing live, their performance had been taped two weeks earlier after the dress rehearsal on February 9. The group was shown performing Twist And Shout, Please Please Me and I Want To Hold Your Hand. Although the British comedy team of Morecambe and Wise was also on the show, their segment, as well as those of the other performers on the show, was taped at a different time. Ed Sullivan’s gamble of booking a then unknown in America group for three shows at a cost of $10,000 paid off handsomely for all parties involved. Sullivan benefited from getting the hottest act in entertainment history on his show for a bargain price, while the Beatles got tremendous exposure that provided the explanation point in Beatlemania! American style. 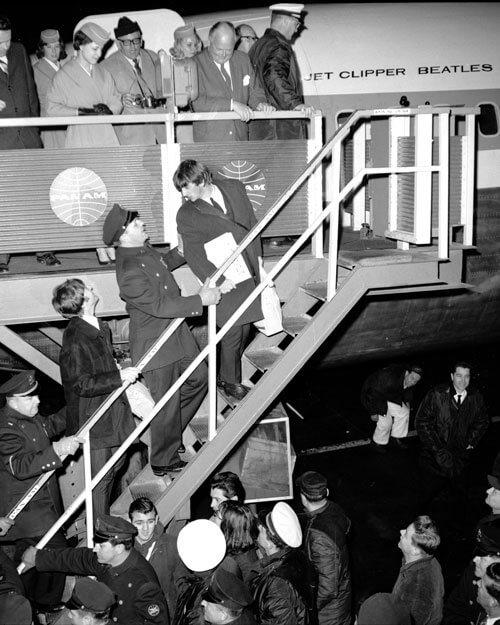