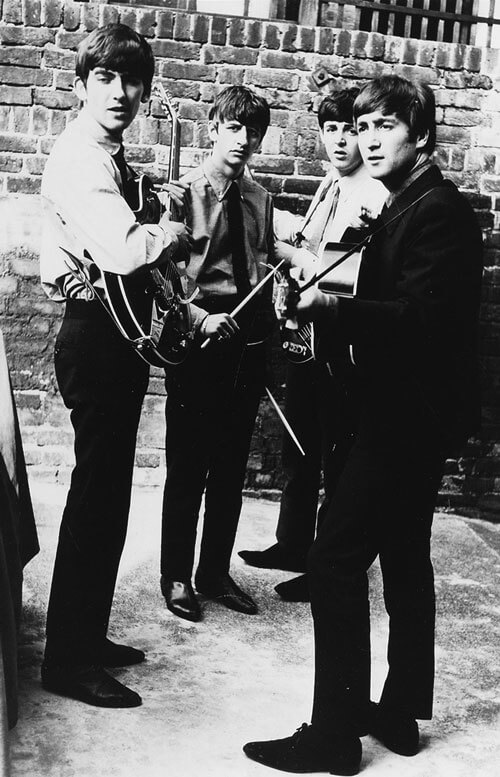 On Monday, July 1, 1963, the Beatles entered Abbey Road’s Studio Two to record their fourth single. I’ll Get You, written in mid-June at the Menlove Avenue home of John’s Aunt Mimi, was originally intended to be the A-side. However, after writing She Loves You on June 26, John and Paul knew they have come up with an even better song.

Prior to the session, the Beatles posed for pictures in the alleyway behind the studio. When word got out that the Beatles were at the studio, a large crowd gathered outside, with some girls climbing on the tops of the walls surrounding the studio to get a better view. Engineer Geoff Emerick recalls John entering the studio and joking about the “Barbarians storming the walls.” Suddenly, Beatles roadies Mal Evans and Neil Aspinall burst into the studio shouting “Fans!” One teenage girl pushed through the door and headed for Ringo, who was behind his drum kit. The roadies managed to capture her and escort her out of the studio. Others fans were running throughout the building in search of their heroes.

The events of the day helped spark a high energy level for the group, which added to the excitement of the recordings. The single would go on to be the group’s biggest selling single in the U.K.

The next day the Beatles were at Maida Vale Studios in London to record another edition of their BBC radio show, Pop Go The Beatles, set for broadcast on July 16. The group recorded nine songs, though only six were used in the show. The songs included a little known song, Clarabella, There’s A Place, Elvis’ That’s All Right (Mama), Chuck Berry’s Carol, Arthur Alexander’s Soldier Of Love, Carl Perkins’ Lend Me Your Comb, which were broadcast, and Ask Me Why, the Coasters’ Three Cool Cats and Chuck Berry’s Sweet Little Sixteen, which were not.

On Wednesday, it was back to the Playhouse Theatre in Manchester, for the BBC radio program The Beat Show. The Beatles performed From Me To You, A Taste Of Honey and Twist And Shout before a very live audience. The half-hour show was broadcast the following day at 1:00 pm.

Prior to the show’s Thursday broadcast, George Martin spent the morning mixing both sides of the single. The Beatles most likely were not in attendance. That evening they went to see the Rolling Stones perform at the Scene Club in Soho, London.

After spending three days of the week recording songs, the group was back to concerts for the weekend, starting with a Friday show at the Plaza Ballroom in Old Hill. One of the opening acts was Denny and the Diplomats. On Saturday, the group played the Memorial Hall in Northwich. They closed the weekend with a Sunday performance at ABC Theatre in Blackpool, Lancashire.

In honor of the 50th anniversary of the recording of She Loves You, the book The Beatles Swan Song: “She Loves You” & Other Records shall be sold at 50% off ($25) for the entire month of July. Those ordering the book during July shall also receive, while supplies last, posters containing images of the records featured in the book and a book mark. Use coupon code SWANJULY2013  Click Here To Order Today