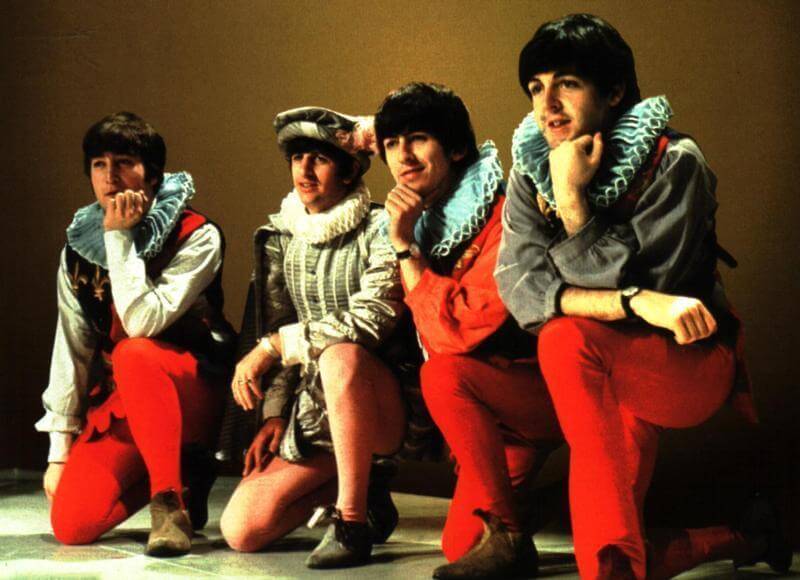 Having completed the filming of their first movie, the Beatles were once again busy with concerts and television appearances. On Sunday, April 26, 1964, the Beatles performed five songs at the New Musical Express 1963 Annual Poll-Winners All-Star Concert held at Empire Pool in Wembley. The group rocked out with She Loves You, You Can’t Do That, Twist And Shout, Long Tall Sally and Can’t Buy Me Love. The concert and award ceremony was broadcast in England two weeks later on ABC Television on May 10.

The following day the Beatles had a dress rehearsal in front of an audience at Wembley Studios for their upcoming TV special Around The Beatles. The show was taped the following day on April 28. In addition to lip-syncing songs previously recorded at IBC Studios on April 19, 1964 (Twist And Shout, Roll Over Beethoven, I Wanna Be Your Man, Long Tall Sally, Can’t Buy Me Love, a medley of their first five singles and Shout), the Beatles, in theatrical costumes, mimed a trumpet fanfare to open the show and took part in a spoof of a Shakespeare play. The hour-long program was broadcast in the U.K. by Rediffusion on May 6. It was broadcast in America by ABC on Sunday evening, November 15, 1964.

On Wednesday, April 29, the Beatles performed at ABC Cinema in Edinburgh, Scotland. Prior to their show, the group gave an interview to BBC Scotland, which was broadcast on the Scottish News that evening. The following afternoon the Beatles were interviewed at their hotel by BBC Scotland for the news program Six Ten, which aired that evening. Later that afternoon the Beatles went to the Royal Theatre Studios of Scottish Television to tape interviews for the program Roundup, which was broadcast on May 5. That evening, the Beatles played two concerts at the Odeon Cinema in Glasgow, Scotland.

The Beatles concluded their busy week on Friday, May 1, with a recording session at BBC Paris Studio in London for another edition of their radio program From Us To You, which was set for broadcast on Whit Monday, May 18. The Beatles performed I Saw Her Standing There, Kansas City, I Forgot To Remember To Forget, You Can’t Do That, Sure To Fall (In Love With You), Can’t Buy Me Love, Matchbox and Honey Don’t, as well as singing Whit Monday To You to the tune of Happy Birthday.

Meanwhile, in America, the Beatles continued their sales and radio domination. In addition to the numerous Beatles singles in the Billboard Top 10 and Hot 100, The Beatles’ Second Album raced past Meet The Beatles! and Introducing The Beatles in just its second week to top the Billboard album chart.