50 Years Ago: BEATLES IN SOUTHPORT AND SUBJECT OF BBC DOCUMENTARY 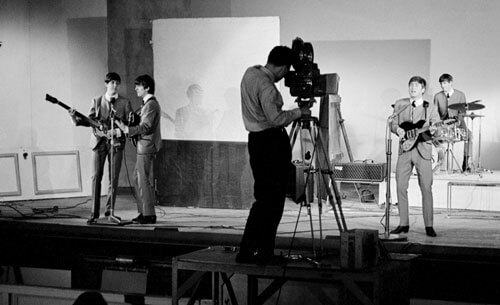 The Beatles spent the week of Monday, August 26, through Saturday, August 31, 1963, performing at the Odeon Cinema in Southport. It marked the third week in a row where the Beatles were the featured band at a cinema performing two shows each night for separate audiences. The group’s set consisted of Roll Over Beethoven, Thank You Girl, Chains, A Taste Of Honey, She Loves You, Baby It’s You, From Me To You, Boys, I Saw Her Standing There and Twist And Shout. In typical Beatles fashion, their days were not spent sleeping late and goofing off.

During the same week, the Beatles were filmed as the featured act in a documentary for BBC television titled The Mersey Sound. The BBC captured footage of the enthusiastic audience attending the band’s Monday night concerts. This was intercut with film of Beatles performing Twist And Shout and She Loves You, shot Tuesday morning without an audience at the Little Theatre in Southport. The following morning they were interviewed by the BBC in Manchester. Film of the boys applying makeup was shot as a lead into the concert footage. On Thursday, they were filmed on the ferry cross the Mersey, signing autographs and looking out to sea, and at the Liverpool Airport, walking downs the steps of an airplane. On Friday morning, the BBC filmed the boys in Liverpool. Ringo was seen exiting his home at 10 Admiral Grove and getting into George’s convertible sports car. Another seen involved Ringo walking through a women’s hair salon, a reference to his often-stated career objective of owning a chain of hair salons. The program was first broadcast on October 9, 1963.

After wrapping up their Southport concerts and their participation in the BBC documentary, the Beatles spent Sunday at ABC’s Manchester studios taping lip-synced performances of From Me To You, She Loves You and Twist And Shout for the television show Big Night Out. The program was broadcast on Saturday, September 7, 1963.

1.         On what program did footage taken from the BBC documentary The Mersey Sound first appear on American television?

2.         What was the song performed by the Beatles on the program referred to in the above question?

1.         Footage taken from the BBC documentary The Mersey Sound first appeared on The Jack Paar Show on January 3, 1964. This preceded the group’s live appearance on The Ed Sullivan Show by over a month.