Work on the Beatles first film at Twickenham continued on April 6 and 7, 1964, with the shooting of the make-up room scenes and the police station scenes. On April 8 the Beatles were given the day off while the opera scene was filmed.

On April 9 work continued on Ringo’s “parading” segment, with filming along the bank of the River Thames. During the scene, Ringo spots a group of young boys who are cutting school. One of them accidentally rolls a tire into Ringo’s path. There is also a scene in which Ringo attempts to take a self- portrait by placing his camera on a rock, only to have the camera fall into the water.

The following day filming resumed at Twickemham with the production office scenes. Unlike the previous day, this time the entire band was involved.

On Sunday, April 12, the group returned to Marylebone Station in London for more filming of the movie’s opening sequence. The screaming fans were not present for these scenes.

Meanwhile, across the pond, the Beatles continued with their domination of the charts, this week with a record 14 songs in the Billboard Hot 100, up from the previous week’s total of 12.

The litigation between Vee-Jay Records and Capitol Records was finally settled at this time, enabling Vee-Jay to proceed with the manufacturing and distribution of Beatles records without interference from Capitol and court injunctions. Vee-Jay sent a telegram (shown below) to its distributors on April 9, 1964, informing them of the settlement. The telegram prodded distributors to get back to pushing Vee-Jay’s Beatles records with a “So, fellows let’s start moving.” 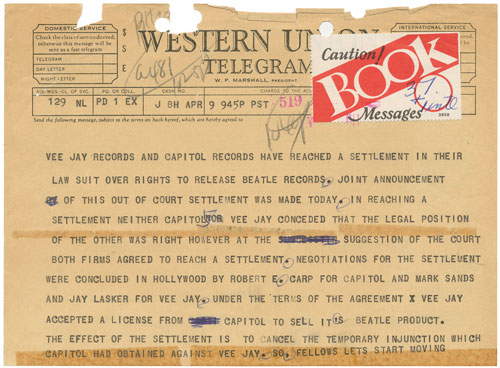 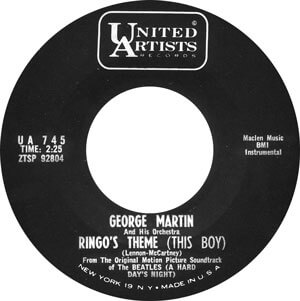 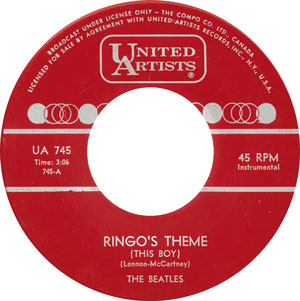