50 Years Ago: A WEEK WITH THE BEATLES AND PRESIDENT KENNEDY 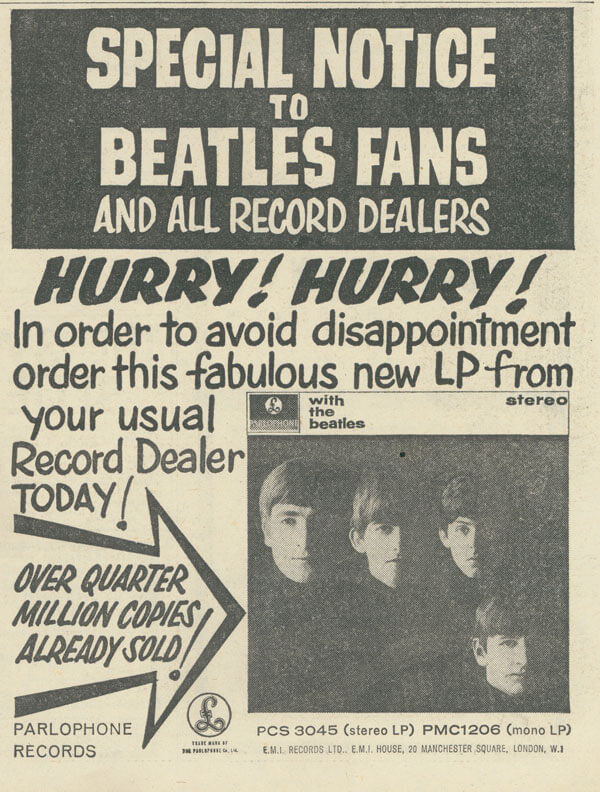 The week of November 18, 1963, started with the Beatles at EMI House in London receiving a slew of silver disc awards, which signified sales of over 250,000 units. EMI presented the group with awards for the albums Please Please Me and With The Beatles, even though the latter LP had yet to be released. George Martin handed the group a silver disc for their EP Twist And Shout, which became the largest selling EP in U.K. history. A British music magazine, which presented silver disc awards for singles, gave the group silver discs for their She Loves You single and the Twist And Shout EP, which had sold as if it were a single.

Meanwhile, across the pond, the Beatles got their first significant national television exposure in America. The Monday, November 18, 1963 edition of NBC’s Huntley-Brinkley Report aired a four-minute story on the Beatles at 6:53 p.m. The segment, which utilized film of the Beatles and the crowd at the group’s November 16 concert at the Winter Gardens Theatre in Bournemouth, was filed by Edwin Newman, a correspondent based in New York who had previously headed the network’s London bureau. Unfortunately neither the broadcast nor the actual segment was taped. All that survives is the transcript of Chet Huntley’s lead-in and lead-out of the Newman’s story. Apparently Newman referred to 17th-century English poet John Milton as Huntley’s lead-out from the story was “Anyone looking for some mute, inglorious Milton will just have to keep on looking.”

On Tuesday, CBS’s London bureau prepared a four minute, ten second segment on the Beatles, which also featured footage of the Beatles Bournemouth concert. The story, filed by Alexander Kendrick, includes film taken at the London Beatles Fan Club, a frenzied concert scene and an interview of the group by Josh Darsa. That evening, the Beatles played a concert at Gaumont Cinema in Wolverhampton.

On Wednesday evening, the Beatles played two shows at the ABC Cinema in Ardwick, Manchester. Pathe News filmed performances of She Loves You and Twist And Shout, which were incorporated into an eight-minute color newsreel on the group titled The Beatles Come To Town. The film was shown in British cinemas from December 22 through 28. Granada TV also filmed part of the concert and interviewed the group, including talk about their upcoming February 1964 visit to the U.S., which had been arranged the previous week by manager Brian Epstein. The story was broadcast on the January 6, 1964 edition of Scene At 6:30. Prior to the concert, BBC radio’s Michael Barton conducted a two-minute interview with the group that ran later that evening on Voice Of The North. Barton also interviewed George for a few words to include on a program about the Liverpool and Hamburg rock scenes.

On Thursday, the Beatles performed at ABC Cinema in Carlisle. Meanwhile, across the pond, President Kennedy landed in Texas for a brief re-election campaign tour, which included planned stops in San Antonio, Houston, Fort Worth, Dallas and Austin. After giving speeches in the first two cities, the President headed for Fort Worth to spend the evening in the Texas Hotel.

On Friday, November 22, 1963, the Beatles second album, With The Beatles, went on sale. Back in the States, the CBS Morning News with Mike Wallace broadcast the network’s story on the Beatles that had been prepared three days earlier by its London bureau. That morning, President Kennedy gave two speeches in Fort Worth and then headed by plane to Dallas, where he and his wife were warmly greeted by an enthusiastic crowd at Love Field. As the President’s motorcade was heading through the streets of Dallas, the Beatles were gearing up for their concert at the Globe Cinema in Stockton-on-Tees, Durham. Back in Dallas, three shots were fired at the President’s motorcade at approximately 12:30 p.m. Central Standard Time. Two of the shots struck the President, with the third and final shot entering his head. Kennedy was taken directly to Parkland Hospital, where he was officially pronounced dead at 1:00 p.m. It is not known when the Beatles received word of the assassination.

While America mourned, the Beatles finished the week with a Saturday concert at the City Hall in Newcastle-upon-Tyne and a Sunday show at ABC Cinema in Hull, Yorkshire.

I will have more on the Beatles Kennedy connection in my next article, which will be posted later this week.

This week’s trivia questions pertain to the British magazine that awarded silver discs to the Beatles and other British recording artists.

1. What was the name of the British music magazine that gave the Beatles silver disc awards in 1963?

2. What was the name of the rival music magazine it merged with in 1966?

3. Who was the owner of that other magazine?

1. Disc magazine gave out silver disc awards to the Beatles in 1963.

2.  In 1966, the magazine merged with Music Echo and was titled Disc and Music Echo magazine through 1972, at which time it reverted to Disc.