50 Years Ago: A Rubber Soul Christmas to Remember 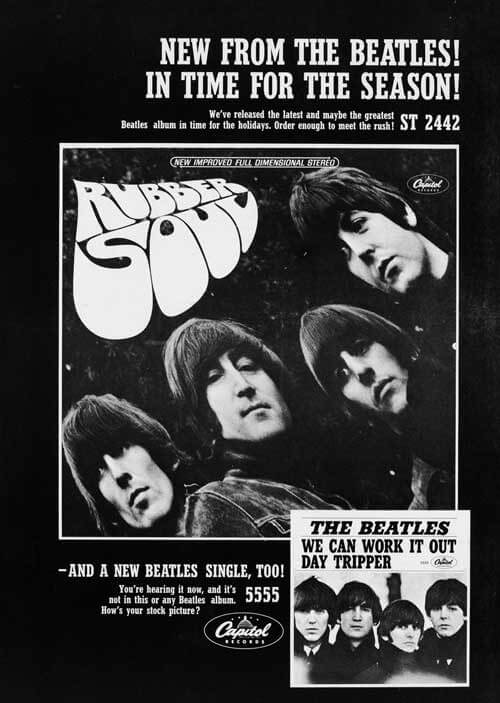 The 1965 Christmas season was a very special time for Beatles fans. On December 3, 1965, Parlophone simultaneously released the double A-side single “We Can Work It Out” c/w “Day Tripper” and the album “Rubber Soul.” In America, Capitol issued the same single and its version of the “Rubber Soul” album three days later on December 6.

In America, “We Can Work It Out” was the more popular track, topping the Billboard Hot 100 and the Cash Box and Record World charts. “Day Tripper” also fared well, with Billboard reporting the song at number five, Cash Box at ten and Record World at 13. The RIAA certified sales of one million units in January 1966.

In England, “Rubber Soul” topped the Record Retailer album charts for eight straight weeks during its 42-week run. It was also reported at number one by the other music magazines.

The “Rubber Soul” sessions began on October 12. Due to the limited time available to have the album in stores by early December, the Beatles had to work quickly. During the next month, the group was in the studio for 100 hours over 15 days, producing a 14-track album and two songs for single release. During these sessions, the Beatles began experimenting with different instruments, including fuzz bass, harmonium, Hammond organ and sitar. They produced a remarkable and diverse body of work, all the more amazing given the time constraints.

While the Beatles previous albums had been collections of great performances, “Rubber Soul” is best appreciated when considered as an entire record–one that set a new standard for the Beatles and rock albums. George Martin’s reflections indicate that this record’s cohesive and innovative nature was intentional: “It was the first album to present a new, growing Beatles to the world. For the first time we began to think of albums as art on their own, as complete entities.” This is not meant to take anything away from the songs; many of the tracks on the disc are among the group’s finest, including “Drive My Car,” “Norwegian Wood,” “Nowhere Man.” “Michelle,” “I’m Looking Through You” and “In My Life.”

In America, “Rubber Soul” became the first Beatles album to have the same title and front and cover art work as that of a British album. Up to this point, Capitol’s Beatles albums bore little resemblance to the British releases. Still, Capitol’s marketing strategy of holding back songs for subsequent release as singles, as well as the practice of placing less than 14 songs on its albums, meant that some changes would be made. Fortunately, Capitol’s alterations were relatively minor. While not exactly what the Beatles and George Martin had in mind, Capitol’s version of “Rubber Soul” is still a great album.

In programming its version of “Rubber Soul,” Capitol was faced with the luxury of having two tracks from the British “Help!” album that had yet to be released in America, namely “I’ve Just Seen A Face” and “It’s Only Love.” As these songs had been issued in England four months earlier, Capitol decided it was time to put them out. The overall quality of the “Rubber Soul” songs gave Capitol the confidence to program the record without a hit single. There was no need to anchor the album with the recent American hit single “Yesterday” or with the songs from the Beatles latest single, “We Can Work It Out” and “Day Tripper.”

Capitol decided to replace the British album’s opening track, the rocker “Drive My Car,” with the folk-sounding “Help!” leftover “I’ve Just Seen A Face.” This move works well, with the song’s intricate acoustic guitar intro grabbing the listener’s attention. Its upbeat folk-rock sound and lyrics blend well with the other tunes on “Rubber Soul.” Capitol wisely did little else to Side One of the album. The remaining tracks appear in the same order as on the British LP, except that “Nowhere Man” was pulled from the lineup and held for issuance as a future single. Capitol programmed Side Two in a similar manner. The opening track from the British LP, the country-flavored “What Goes On,” was replaced with the other “Help!” leftover, “It’s Only Love.” Once again, this move was effective due to the song’s folk-rock sound. The remaining tracks on Side Two appear in the same order as on the British LP, except that “If I Needed Someone” was pulled from the lineup. The four songs left off the Capitol version of the album would appear six months later on Capitol’s “Yesterday And Today” LP.

Capitol had complete confidence that “Rubber Soul” would be a tremendous seller. Its initial pressing of two million units was the most in the label’s history at that time. In a January 1, 1966, article titled “‘Rubber Soul’ A Whopper for Beatles,” Billboard reported that the group had topped themselves by selling 1,200,000 copies of the album in its first nine days. The RIAA certified sales of over four million copies for the Capitol version of the album.

Many people, particularly those who grew up with the American LP, actually prefer Capitol’s “Rubber Soul” over its British counterpart. The Capitol version of “Rubber Soul” has more acoustic and less rock songs than the British disc, giving the album a cohesive folk-rock sound. At the time “Rubber Soul” was released in 1965, British LPs were seldom imported into the U.S. There was no internet, iTunes or You Tube to enable Americans to hear the Beatles U.K. discs. Thus, it was the Capitol album that was heard by and that influenced American recording artists. It was the Capitol version of “Rubber Soul” that motivated Brian Wilson of the Beach Boys to strive for even greater studio achievements, resulting in “Pet Sounds,” which in turn pushed the Beatles to create “Sgt. Pepper’s Lonely Hearts Club Band.”

As for which version of “Rubber Soul” is better, Beatles fans should not concern themselves over finding a definitive answer. The original British LP and the Capitol album are different listening experiences. It’s like comparing a great red wine to a great white wine. Both have their own special subtleties and both should be savored.

1. Eight of the 16 songs recorded during the “Rubber Soul” sessions are on “The Beatles 1962 – 1966,” an incredible one-half. The songs are:
We Can Work It Out
Day Tripper
Drive My Car
Norwegian Wood
Nowhere Man
Michelle
In My Life
Girl 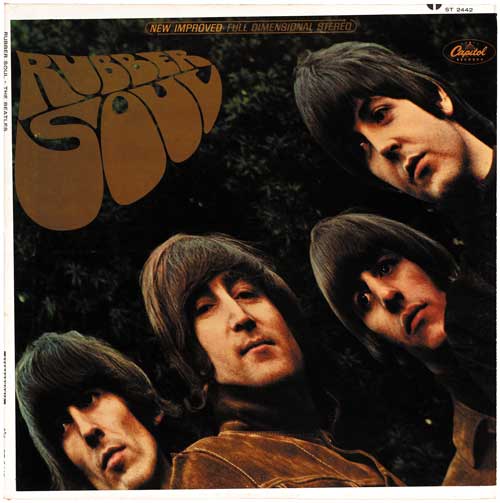 2. The opening line to John’s Run For Your Life (“I’d rather see you dead little girl than to be with another man”) was lifted from Arthur Gunter’s Baby Let’s Play House (Excello 2047). John was familiar with the song through Elvis Presley’s recording, which was originally issued on Sun 217.

3. The October, 1977, National Lampoon Beatles satire issue contained a parody of the Rubber Soul album, which was renamed Rabbi Saul. The cover depicts the group as Hasidic Jews. The album supposedly was produced as a tribute to the group’s Jewish manager, Brian Epstein, and included the songs Hey Juden, Here Comes My Son The Doctor Robert, Helter Schmelter, Your Mother Should Only Know, If I Kvell, Sexy Seder and The Schul On The Hill.